After skiing the West Shoulder of Athabasca the day before, Kieran and I had received some beta about the conditions on Mt. Andromeda’s ultra classic Skyladder. While it looked pretty shiny from the parking lot, another party had chanced it as a ski descent and found it engaging, but skiable. Full props to them. We’re fairly sure they opened the line in a season when many an armchair mountaineer had written it off. You never know until you go. Or until someone else goes and you snag their beta.

Kieran catches a nap in anticipation of another predawn start the following day.

Anticipating a relatively quick day, and a slightly better freeze than the night previous, we slept in a little and got going around 0400. Heading up the approach, dawn treated us to a glorious sunrise, which lit our surroundings with some distinctly above average alpenglow. That certainly never gets old. More ominous was a bank of cloud, marauding its way across the icefield towards Andromeda, but we had nothing better to do, so we pushed on anyway. 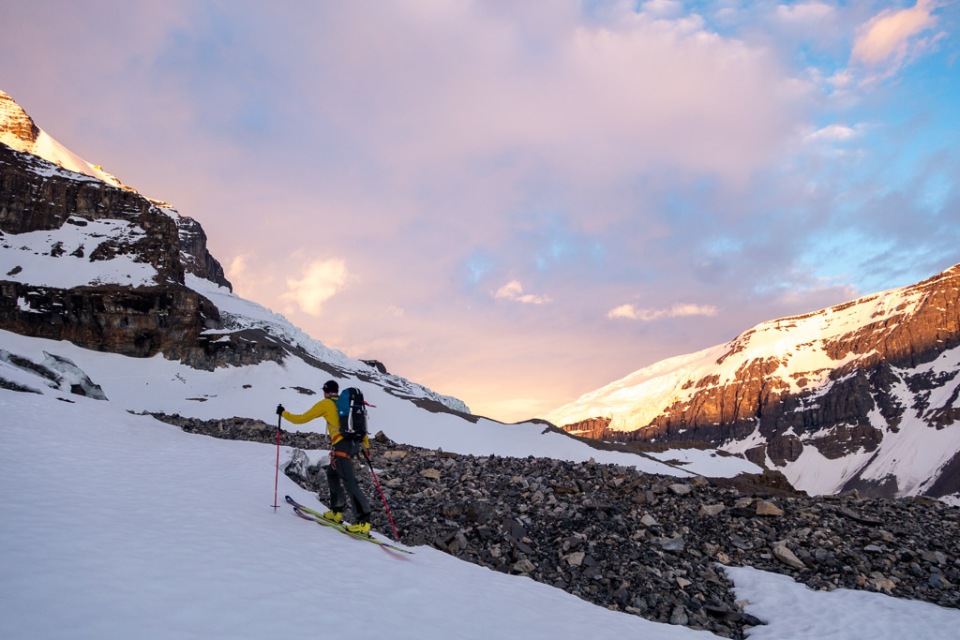 Beautiful, but how does that saying go again? Red sky in morning…

Before arriving at the line itself, we got to experience the shattered approach glacier in near summer form, which, as cool as blue ice is, was less than ideal. Soon though, we were climbing the route and making excellent time. Great travel was probably going to make for some firm skiing – especially with heavy cloud rolling in to blot out the softening power of the sun. We kept at it, because moderate climbing is fun for its own sake and firm skiing is certainly better than none. 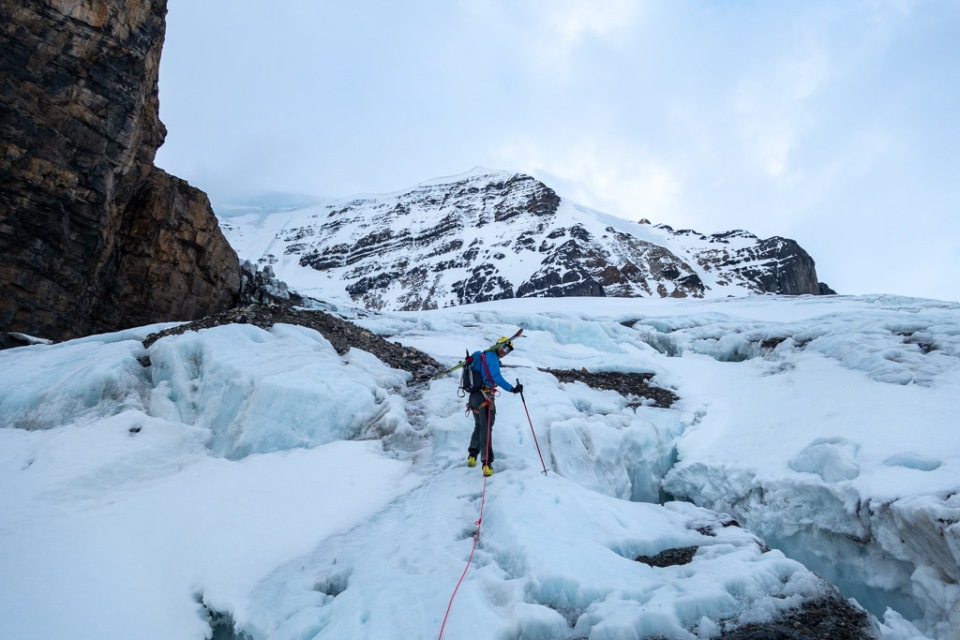 We ambitiously put some knots in the rope to help create friction in the snow to slow a fall. Turned out to be a moot point when there wasn’t any snow at all. 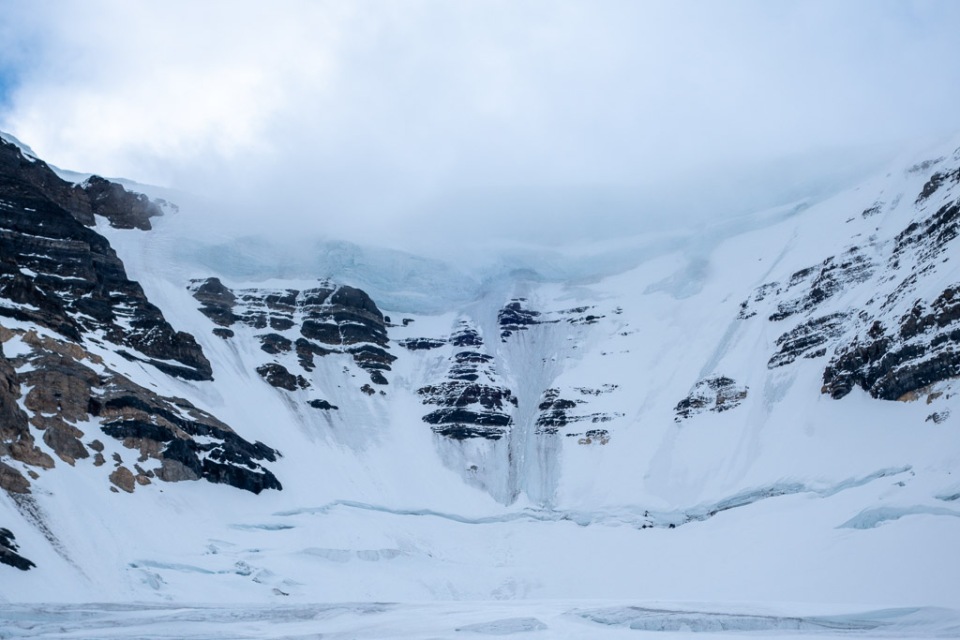 The North Bowl in fearsome ski condition to say the least.

It’s hard to think of a more scenic bootpack.

When Kieran and I hit the ridge, the weather hit us with an ‘atmospheric’ blast. Cloud whipped by, propelled by the kind of wind that seems to steal your breath a little. I really enjoy that kind of thing from time to time. Kieran on the other hand does not. Fair enough. He was a good sport about it and agreed to continue with me to the summit anyway, despite having been there before. Indeed, he had also skied the Skyladder in far better condition than we were about to only a year previous.

In the style of a Stephen King novel, the lurking cloud envelopes the icefield.

I appreciated his company as we crested the final few meters in a complete whiteout. Things were so bare up there that we were even able to find the summit register, wired directly into the ice. It was of the universally worthless pvc pipe variety, so the unbagged pages within were soaked through and frozen solid but the thought was there, I suppose. 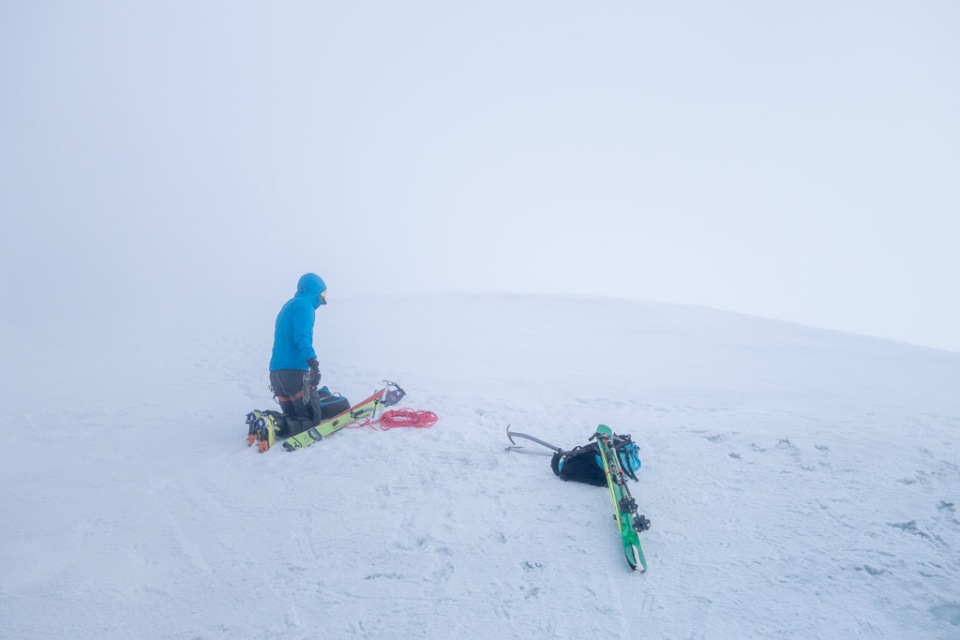 You can tell it’s the summit because there’s no more up.

There was no point sticking around on the summit. A few sucker holes opened and closed while we were up there, but by and large it felt like the inside of a ping pong ball. Much like the first time I summited Athabasca, the experience left a little to be desired.

Skiing down that upper ridge was similarly unremarkable. A fair bit of sidestepping was necessary, since we couldn’t see far enough to get our speed up. Once on the Skyladder itself though, things improved quickly in the visibility department.

One of the descent’s scratchier sections.

As the line rolled over, we got the classic view down towards the Athabasca glacier far below. To skier’s right was a large swath of bare ice, and directly fall line a good amount of hard, steepish snow. The position was both awe inspiring and nerve wracking, but as usual, it all faded into a calm sense of focus and flow. Turn by turn, we worked our way down. 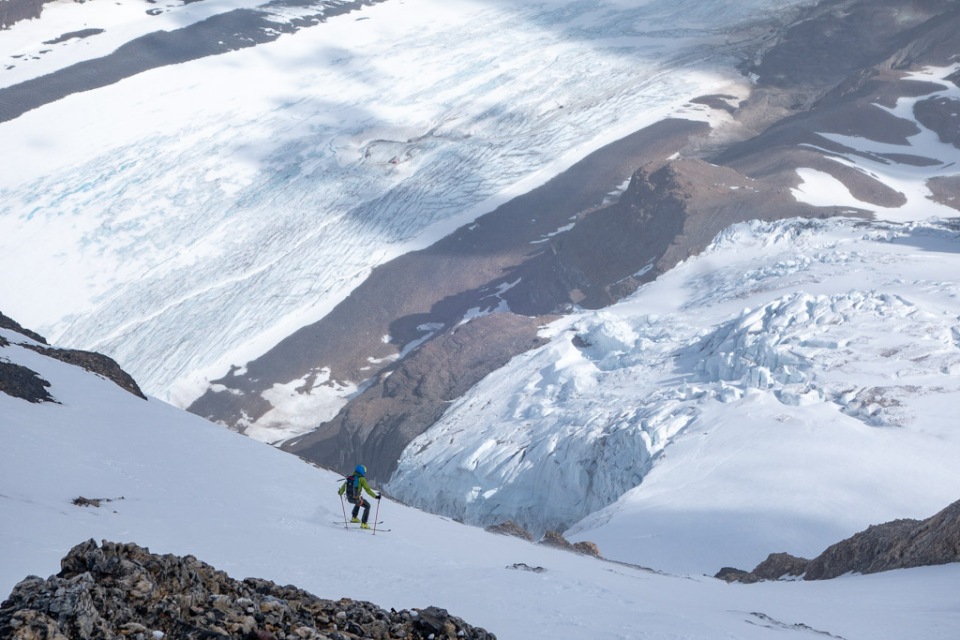 The bottom third of the line had taken some light rain and a bit more warming throughout the morning, so from there on down we were treated to a five star corn run. After the physically and mentally demanding skiing above, wide open turns on the glacier were a great release.

I’ve wanted to ski the Skyladder for years – since well before I had any right to be considering it. Scratchy conditions be damned, it was a fantastic ski. I rarely consider repeating routes, as there’s so much to do, but I’ll keep this one on the list. It’s just that good. Maybe I’ll wait for some better snow next time.

← Mt. Athabasca West Shoulder
Popes Peak or: How I Learned to Stop Worrying and Love the Bail →