On August 23, summer or not, the forecast was calling for snow. Having been without the restorative effects of exposure and a good bone-chilling alpine wind for altogether too long, Trevor and I decided it was time for a mission to Mt. Athabasca’s beautiful Silverhorn. Ian was interested as well, but had injured his foot recently and wasn’t too sure about front pointing. At the last moment, Trevor reassured him with a text, saying something along the lines of “What if we took the bypass route and the sun came out?” Ian’s response: “I’ll be there in 5”.

A layer of cloud was in the forecast all day and the cooler temperatures of late summer in our favour, so we didn’t worry too much about an ultra-early start, leaving Golden around 3 AM. Sunrise found us grinding our way up the moraine below the toe of the glacier and soon after we were skinning upwards. 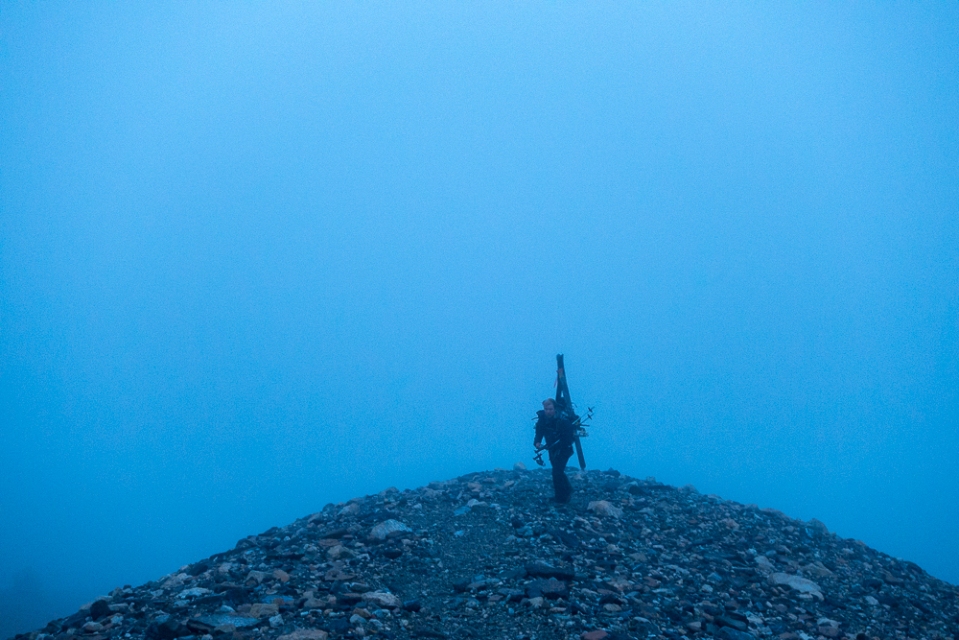 Ian grinds up the moraine, less than dazzled by the view.

Visibility was awful, but we did have the footprints of a party ahead of us to follow, as well as Trevor’s previous descent (but not ascent) of the route and a previous attempt for Ian some 6 years earlier as well. Near the base of the route though, the party ahead turned back, not feeling the visibility and fresh snow. The cloud closed in even tighter after that, forcing a bit of a break while we tried to figure out where exactly our objective was.

Does anybody know where the Silverhorn… is?

We turned out to be much closer to the intended line than we thought and soon we were kicking steps into the bottom of the route. It was there that we found a fairly gaping bergschrund that was going to take some effort to get across. Trevor found the line up first and rigged a quick belay off one of his alpine axes; as much for moral support as anything else. 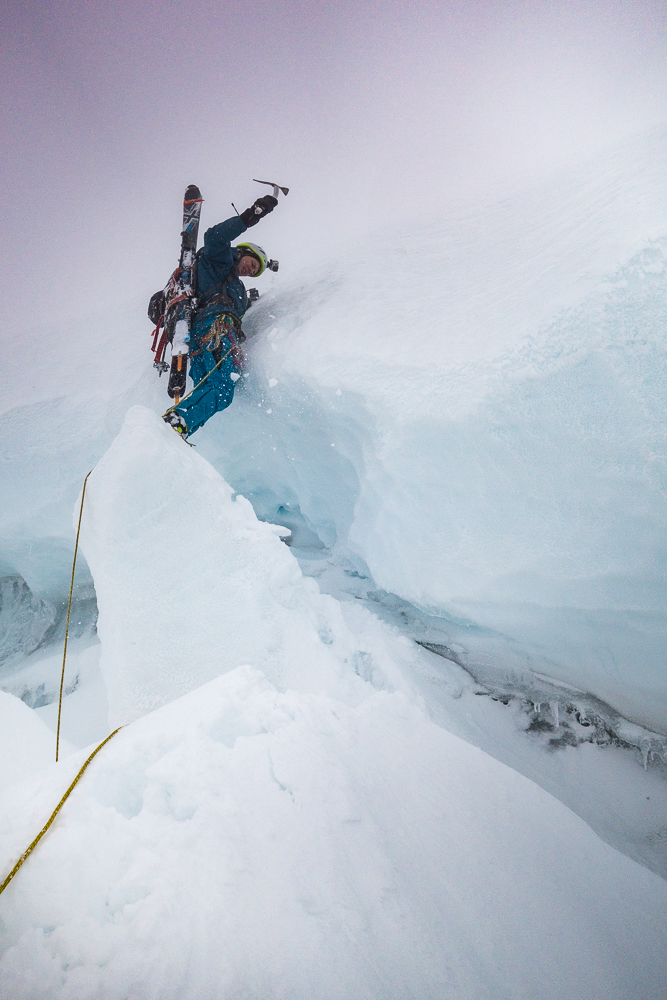 Ian and I followed the fun few moves of ice, which got us back to sustained steep front pointing. Now with the keen awareness of the hungry schrund below to keep us (literally) on our toes we unroped, knowing that from here, a fall into the mist would almost certainly be beyond what the team could arrest. 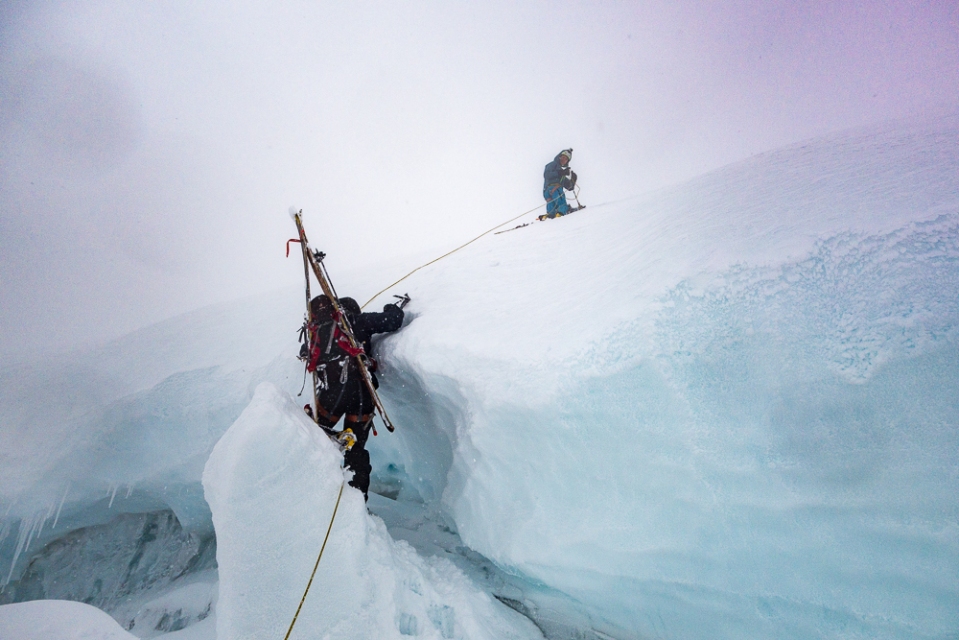 Once we busted up onto the ridge, the route became a little icier and mostly stayed that way. It was one of the longest periods of time I’ve spent swinging two axes for a ski line – technical and thought-provoking in places, and you certainly wouldn’t want to fall anywhere – but never so tough as to be terrifying. The focus and clarity of soloing that kind of alpine terrain is always a special experience.

Eventually, the terrain mellowed as we reached the top of the Silverhorn. From there, it was an easy traverse along the ridge to the true summit of Mt. Athabasca, where Trevor dug fruitlessly through a few cairns in search of the summit register. 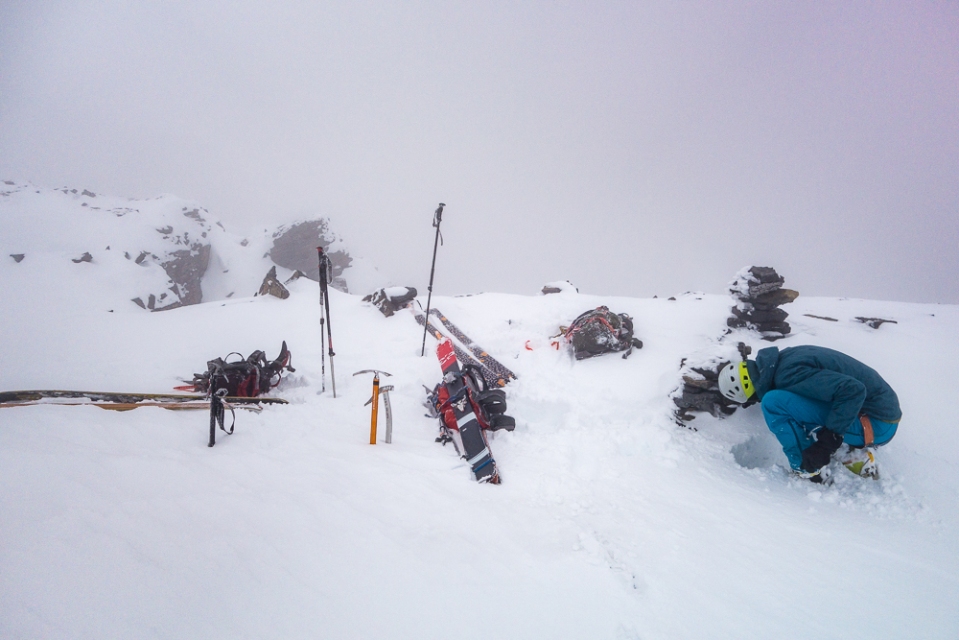 As we transitioned into ski mode, a patch of blue miraculously appeared overhead. “Sucker hole” proclaimed Ian as Trevor ran for the ridge to get a look back down the valley.

Annoyingly, he was right and by the time we regained the Silverhorn, visibility was back down to zero. Dropping into the abyss, we made our turns carefully on firm, but consistent snow over alpine ice. 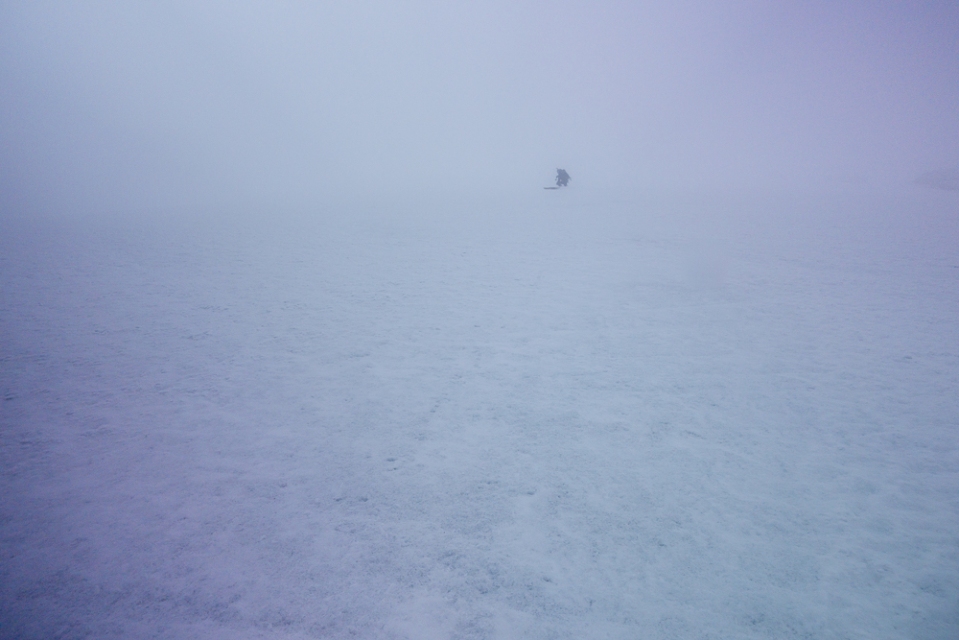 Ian skis towards me.

There could be absolutely anything down there…

Soon, pockets of powder began to appear more and more frequently. Then the sky cleared again and we cruised the lower half of the route in perfect conditions, noting along the way that our bergschrund crux would have been entirely avoidable had we been able to see further than 10 meters.

As Trevor put it: “Now we’re better at climbing”.

A mellow cruise through the sun on the lower glacier.

From there, we made easy turns and aired over cracks to get back to our hiking boots. Some scree bashing back to the car had us confusing tourists in no time. That’s nothing new, but it is oddly satisfying after a day of skiing summer pow and tagging a particularly aesthetic ski descent, as well as a new (to Ian and I) 11000er. 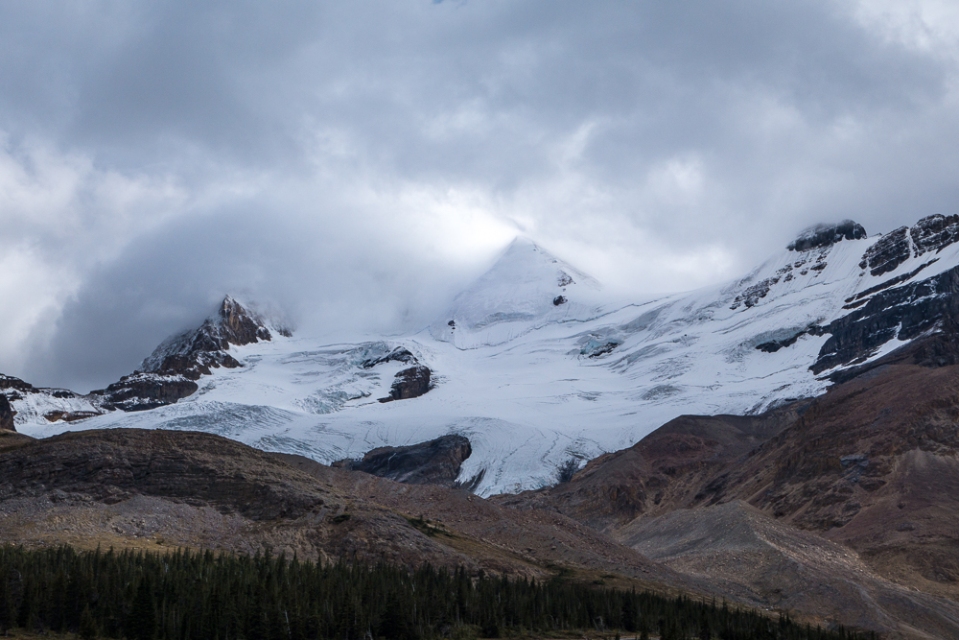 Nothing but stoked to have put tracks on that one.

Post mission psyche aside, for me, these kinds of days in the alpine hold a humbling honesty. They strip away everything – good, bad or otherwise – and after that short break from reality, what’s left behind is a searing reminder of the few things in life that truly matter. Every now and then, that comes in handy.