So far, the theme of this season seems to have been roadside classics. With good weather lasting hours rather than days lately, my motivation for mega missions and overnights has been low. It’s easier to time quick windows on the metaphorical low hanging fruit, and there’s a far higher chance of success when the lines are visible from the parking lot. With that in mind, Jason and I saw the first solid overnight freeze in several days in the forecast and made plans to go after the ultra classic north face of Mt. Stanley.

The day got off to a pretty inauspicious start though, when I realized that I forgot my skins, which delayed our already fairly leisurely start by another half an hour. Perfect. Happily, we made it to the trailhead without further incident and the temperature was still a brisk -4 when we arrived. In fact, the crust was so solid that when the dirt trail turned to snow we just kept walking. 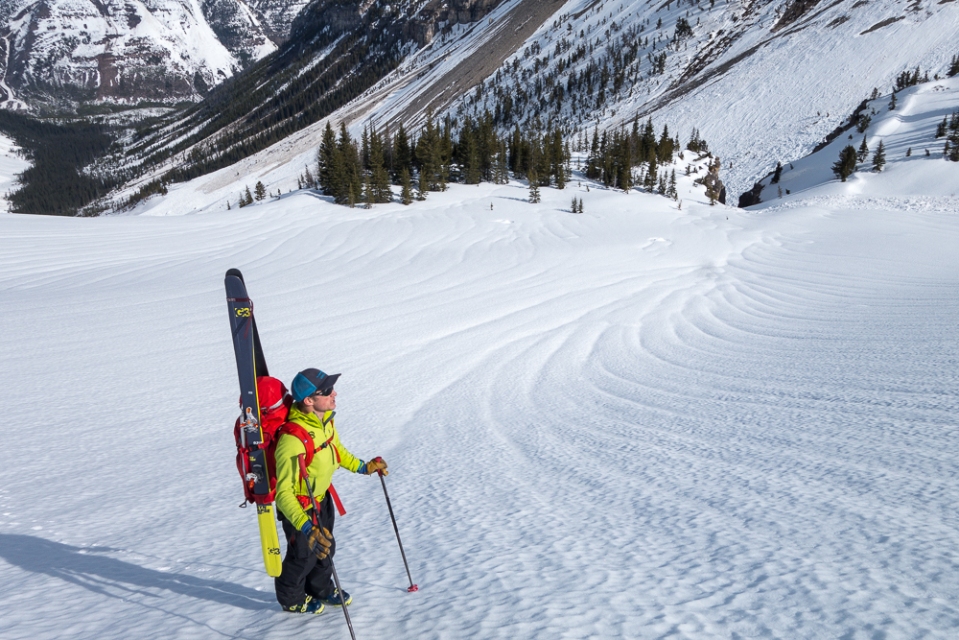 We walked right on by the exposed shortcut route and up the moraines to the toe of the glacier. Then, with boot crampons, up the still somewhat exposed ramp and onto the crevassed flats above. By this point the sun had been on the snow for some time, and we were quite surprised to note that it was still frozen sidewalk-hard. If it would save us a transition though, who were we to complain? 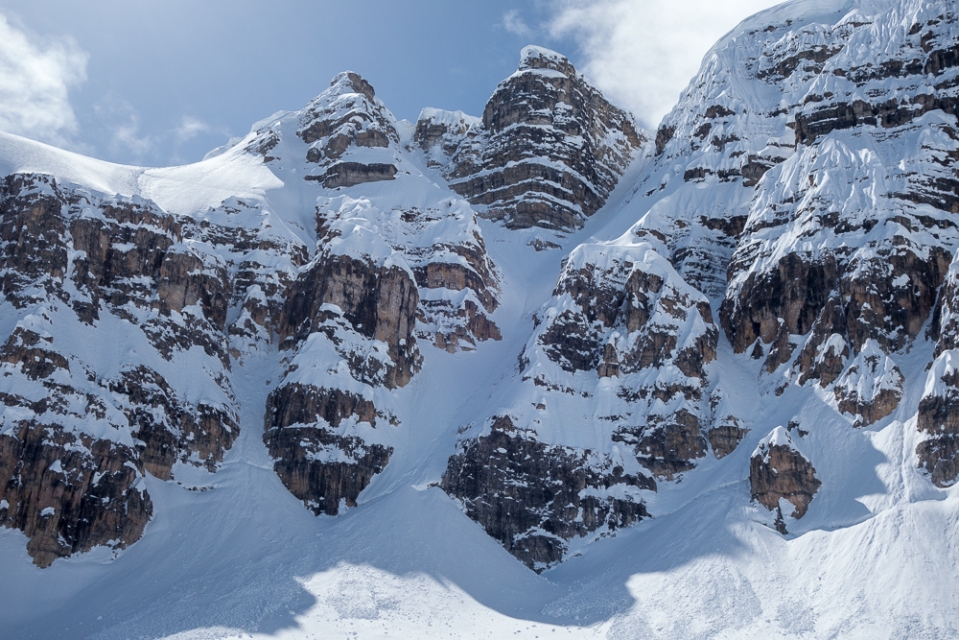 Aaaand the Waterman… not so much.

Surrounded by excellent weather, scenery and travel we started up the face. Aside from one very small, very dark hole there was no evidence of the bergschrund at all. We cruised up in good time on snow that showed no signs of warming up. We did notice a crust lurking under two or three centimeters of fresh, but it was thin and yielded easily under our boots. No problem, we thought.

After a brief field trip to tag the summit, it was time to go skiing. I dropped in first, made about five turns in some windblown powder at the top and then met the crust, which was vastly less skiable then we had expected it to be. As the face rolled over, it became imperative that every turn be executed properly, as the crust was both extremely hard and thin enough to break into ugly dinner plates. These would either grab at a ski edge or slide with it, depending on their mood. It was slow going but I made it down to a rib to rest for a little while Jason made his way down to me. 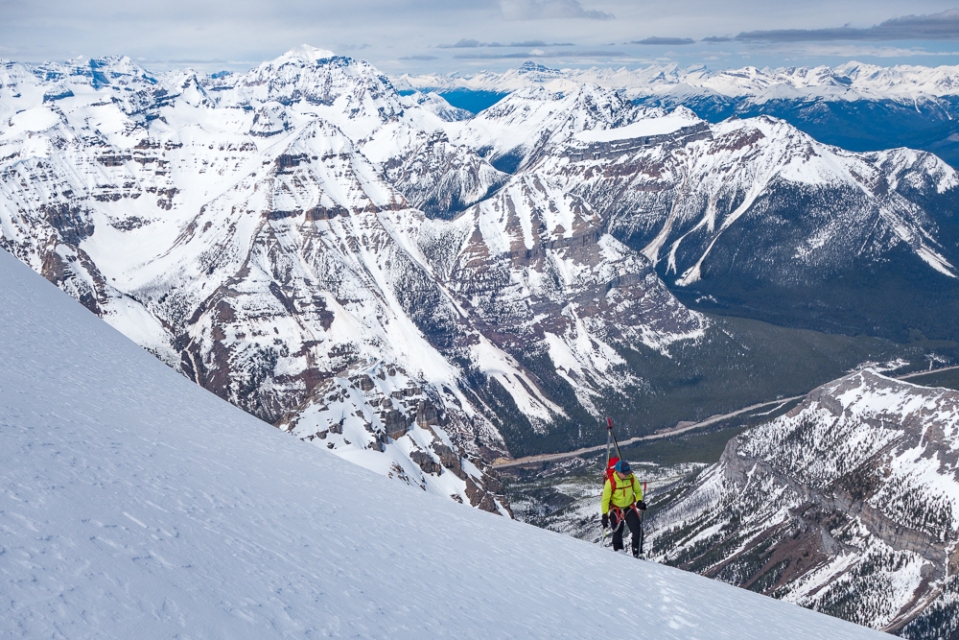 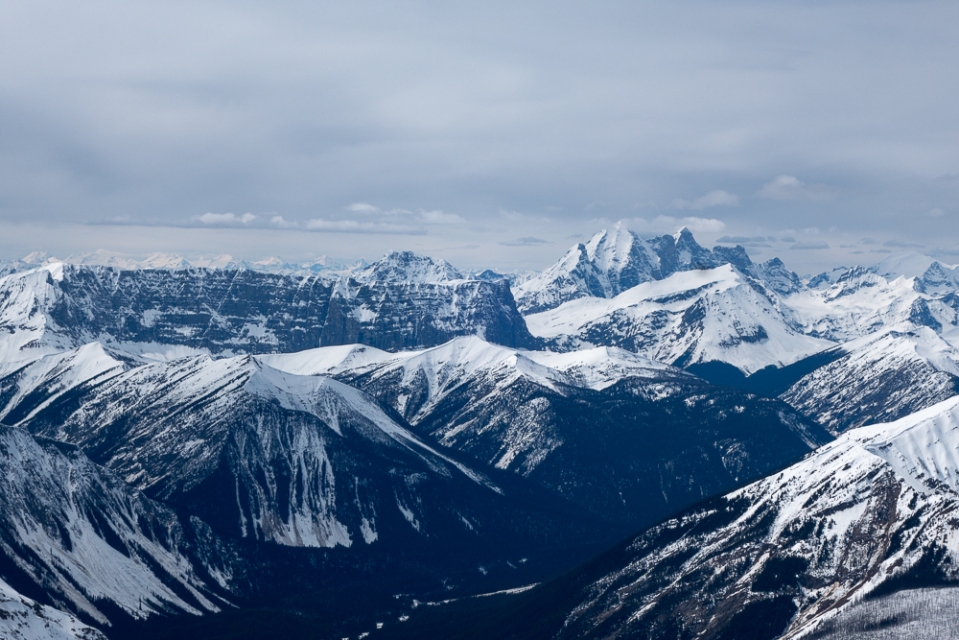 The Rockwall and the Goodsirs offer up a striking horizon.

The middle of the face saw the crust grow even more impenetrable, so even the most cautious turns began to result in long, chattery slides. With enough exposure below that a fall would seriously ruin our day, I went into sideslip mode for a ways until things softened up again on the lower third. Jason had chosen to just downclimb the middle section, so I hung out for a while before we both cruised out across the glacier and back to the toe.

Although the descent took significantly longer then we had planned for, we were pleasantly surprised to note that the snow was still supportive. Actually, the skiing from the glacier down into the valley was by far the best of the day on perfect, velvety corn. That helped numb the memory of the face a little, and kept us motivated us to thrash our way down to road level, where snow conditions were… a little worse. 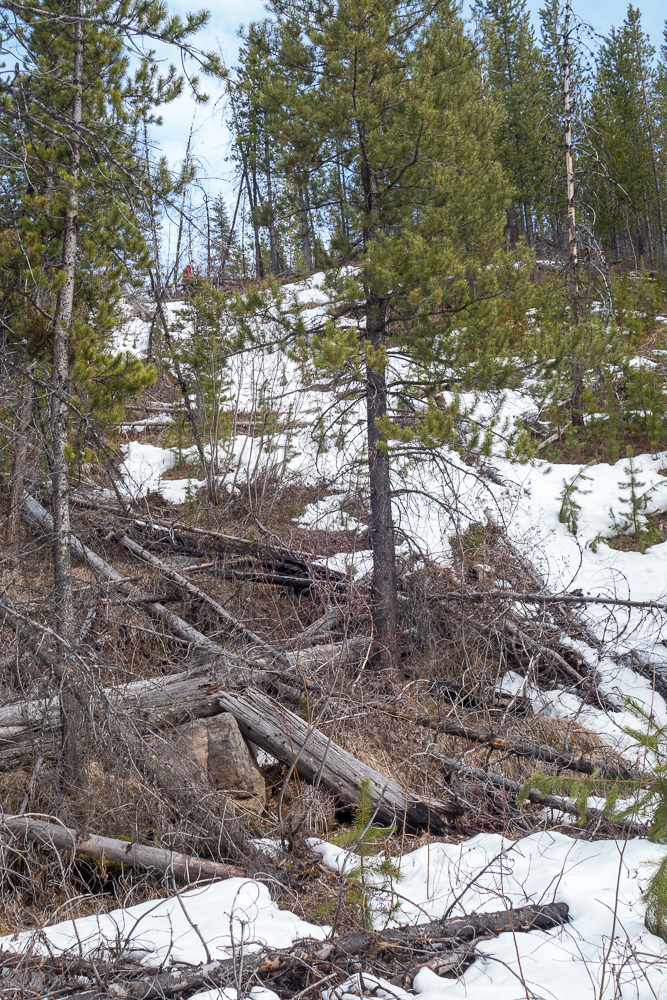 All in all, not exactly how I hoped to ski this classic line, but sometimes it’s just fun to take the skis out for an alpine climb. Such a beautiful, consistent face deserves to be skied properly though, so I’ll be back.