With temperatures locked into a very spring-like cycle for a few days, Kieran, Joel and I got to discussing some bigger lines. It was looking like the time to send. So, some hours later it was 4am and we were rolling out of Canmore, sights set on Bow Peak’s Funnel of Death; a line that, while often talked about is not often skied. Perhaps understandably, given the name.The steep couloirs on Bow are ideally situated for such early season endeavours though, because the approach is so short. When you can be at the base of your couloir inside of an hour, it becomes much simpler to get up and down before the sun starts loosening a winter’s worth of snow overhead.

A great look at the FOD from the highway.

We took advantage of that fact and got to the top of the West Nile trees in short order. Then we began working our way north along fans and benches to the base of our objective. Or, I should say, what we thought was the base. Certain we had gone far enough and having caught a glimpse of a weakness above us in the faint moonlight, we started up a scrappy mixed gully next to what could have been the entrance to a couloir.

It was not, but on the bright side, we’re better climbers now. Plus the little pitch we skied was actually quite good, and gave us a feel for the day’s snow. Best of all we only wasted about half an hour.

Shortly afterward, we found our quarry, one fan further north. A good reminder for big line season – never assume that what’s simple in the daylight will also be simple in the dark. Up we went, wasting no time getting into the narrow guts of the lower couloir.

Kieran nearing the top of the couloir.

The thing is surprisingly consistent in its narrowness, and all three of us were looking quite forward to skiing it. First, though, we’d have to bust up the triangular snowfield that gives the line its distinctive funnel appearance.

The snow started to get a little deeper and a little softer as we pushed higher. Some 30m from the top, things took a turn for the worse and we started to encounter a bit of a slab overlying some leftover facets. The face was riddled with thin spots and quick hand shears inspired no confidence at all. Grudgingly, we gave up on our aspirations of reaching ridgetop.

After a speedy transition, we dropped in and the snowpack’s little slight was quickly forgotten. The line was in glorious steep skiing condition, with consistent, soft snow on the face transitioning into classic alpine styrofoam for the duration of the couloir.

Tight turns on the steep upper face for Joel…

An incredible line that easily justified its classic status, despite its apparent lack of popularity. 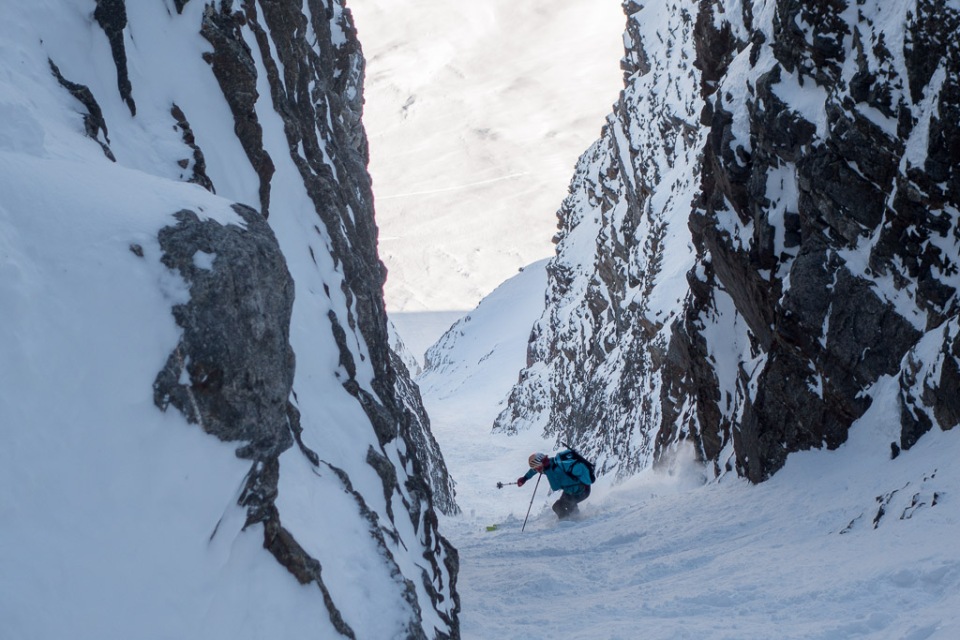 …And even tighter ones in the chokes below.

We were back in Canmore by early afternoon. Plenty of time to scheme up something for the next day. Since we knew conditions on Bow were more or less what we were after, we quickly decided to return for Gutentight couloir – the final named line on the peak’s north/northeast face that the three of us had yet to ski. 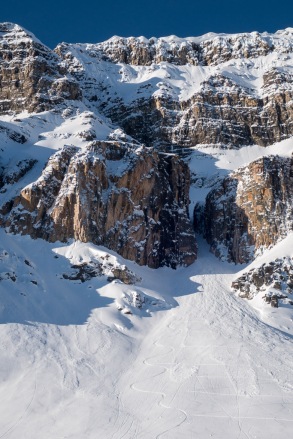 Another 4am departure saw us climbing into the line under cover of darkness. Dawn broke as we moved up through the spectacularly uniform lower couloir, bathing the place in a soft purple glow.

A wild and aesthetic feature.

We were out of range of a large portion of the line’s overhead hazard before even the alpenglow kissed the face, which was a nice feeling. As we pressed on into the upper couloir, things started to get steep and a little firm. Classic in your face snow climbing, with the sunrise at our backs and a bit of exposure below.

Further up, the couloir tightened and became runneled. The snow was hard packed and grabby. Skiing seemed like it would be a chore, and quite scary to boot. Understandably, Joel and Kieran decided they’d rather stick to the fun part and found themselves a safe spot to change over.

Kieran and Joel move to a safer transition spot as I continue upwards.

I kept going, reasoning that if nothing else, the rugged skiing would sharpen my skills a little for the rest of the season. I swapped over to skis just below the cornice by maybe 10 meters. Above me was nothing but cornice and ominously listing mushrooms, and there was plenty to deal with below anyway.

Once swapped over, I did my best to make turns in the upper couloir, but was successful in only a few places. The rest of it required a less interesting combination of sideslipping in the runnel with only tips and tails in contact with the snow and axe-out downclimbing moves with skis on – albeit easy ones. It was good practice for something, I’m sure.

When I reached the guys’ transition point the snow improved markedly, and I got some great steep pow on a bit of a panel next to our climbing line.

Kieran having some fun on the more open middle section.

Then we all took turns skiing the more open terrain in the middle section, followed by the incredibly aesthetic exit couloir. After that, a quick skin and ski back to the car by 11 so Joel could get to work by 2. A very successful couple of days in some wild terrain. Now only time will tell if spring is here to stay.

2 Comments on “Bow Peak: Funnel of Death and Gutentight Couloir”