Well into the second half of August and still no precipitation to speak of, so time for another corn ski. After some deliberation, I settled on a visit to the Beaverfoot Valley for the south face of Hewitt Peak. You could be forgiven if you haven’t heard of it. It’s an obscure ~3000m Rockies summit on the west side of the Rockwall, right at the edge of Kootenay National Park. Trevor skied it in September after a hot summer several years ago, and it seemed like a decent bet to have held onto its snow this year.

With no partner to hold me accountable, I lounged in bed for a little too long, pondering the ridiculousness of my chosen activity. Eventually, I got out the door around 3AM and headed up the Beaverfoot, managing to find what I was pretty sure was the trailhead on the first try.

Within the first 10 minutes of wandering along the old road in the dark, my headlamp had already illuminated three piles of bear shit. The bushes around me were full of ripe (and delicious) berries. I turned the volume of my podcast up as high as it would go, hoping that its emphatic description of the horrors of the First World War would be enough to convince any ursine visitors that they wanted nothing to do with me or, for that matter, humanity in general.

Soon, the actual horse trail from Trevor’s trip report materialized, leading down into the tangle of trees around Paul Creek. In the past few years it’s taken on the character of a scrubby game path, but it got me through the majority of the dense forest. Further up the valley, alder and other garbage started to take over and the trail gradually petered out. I eventually lost it completely. 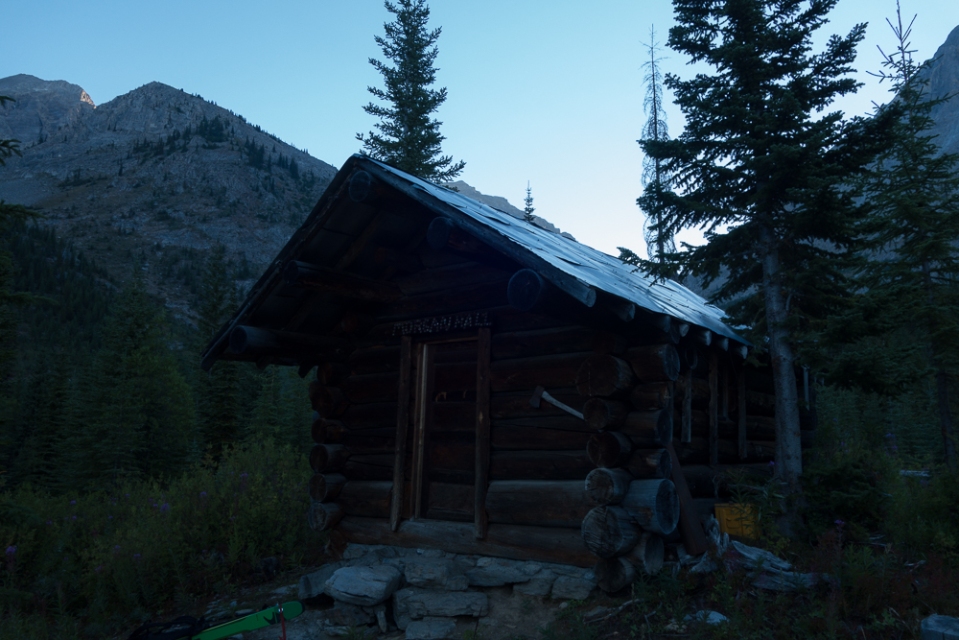 That explains the trail.

I hacked my way through a few slide paths and some more dense trees for a while until the terrain opened and I found the trail again. That lasted for all of about 10 minutes. The rest of the valley was mostly chest deep weeds and one stretch of near impenetrable, overhead shrubbery. That stretch was notable for the fact that the shrubbery was so dense I could, at times, walk on top of it. It’s also notable for how dark it was in there when I dropped through.

It was with some relief that I broke into the cirque containing the skiing. I was happy to be past the aggressive local flora and even happier to get a look at the line. 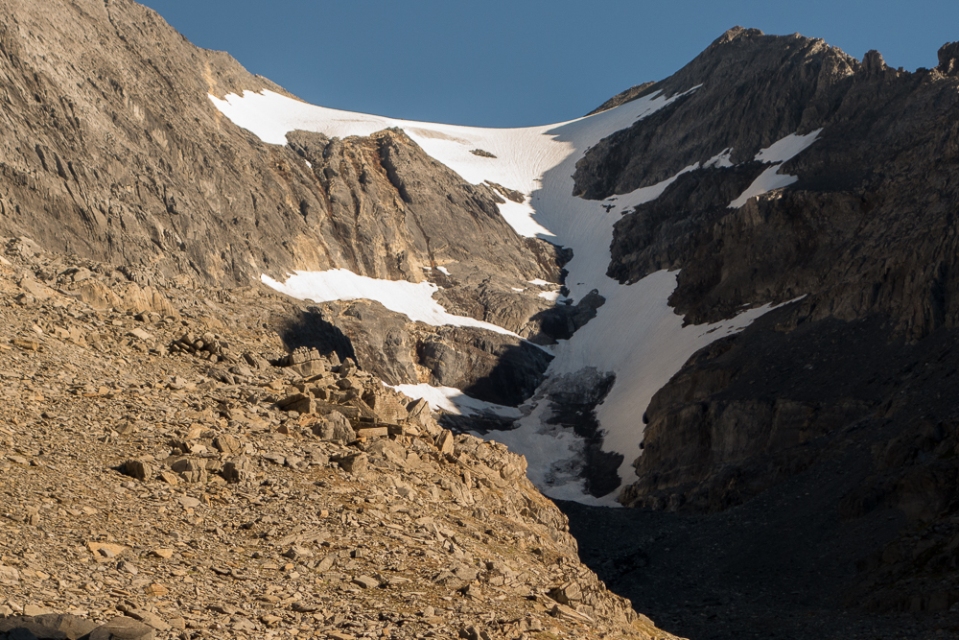 It seemed in great shape, with continuous snow all the way up. I plodded up scree to the firn line, then switched straight to crampons and climbed softening snow until it ended, pleasantly surprised by the relative steepness. This was going to be a good run.

At the col, I dropped my pack and scrambled to the summit only a few meters away. The views from there were tremendous. Nearly the entirety of the northern Purcells stood tall on the western horizon, with some Selkirks giants for good measure. To the east, an embarrassment of Rockies riches. And of course the Rockwall, right in the foreground and from above. I lounged on the summit for a little while, snapping beta photos and taking it in.

A stellar view of the Bugs and Vowells.

And last but not least, the Lake Louise group.

Then, ski time. The line was of the highest quality for an August corn ski, 500m of 40+ degree snow, and soft enough not to feel the sun cups. In this brutally hot summer, it’s hard to ask for more. 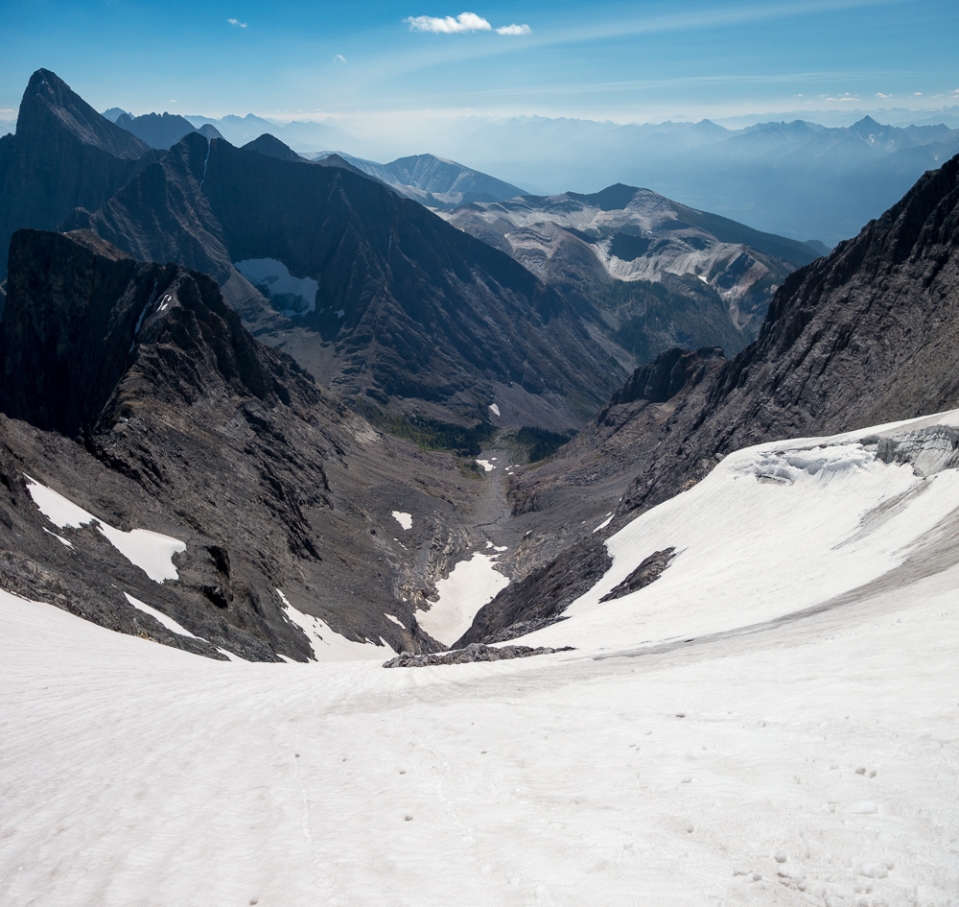 I was dreading the hike out, but it turned out to be much more pleasant than expected. I chose a better line out of the cirque and picked up the trail right from its highest point. With the benefit of daylight, I managed to follow it for its entirety back to the cutblock and my car, although I still had to search around a few times. If anyone is interested, I now have a gpx file of the route. It’s a fine summer ski descent in a spectacular setting, and it would make a great addition to any year round skier’s tick list. 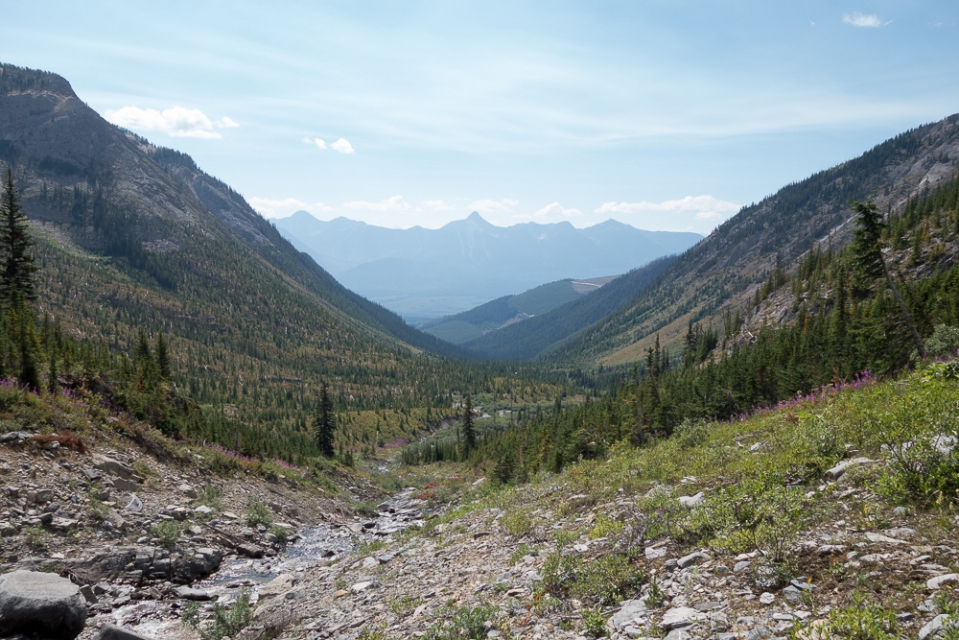 The valley looks pretty long on the way out. 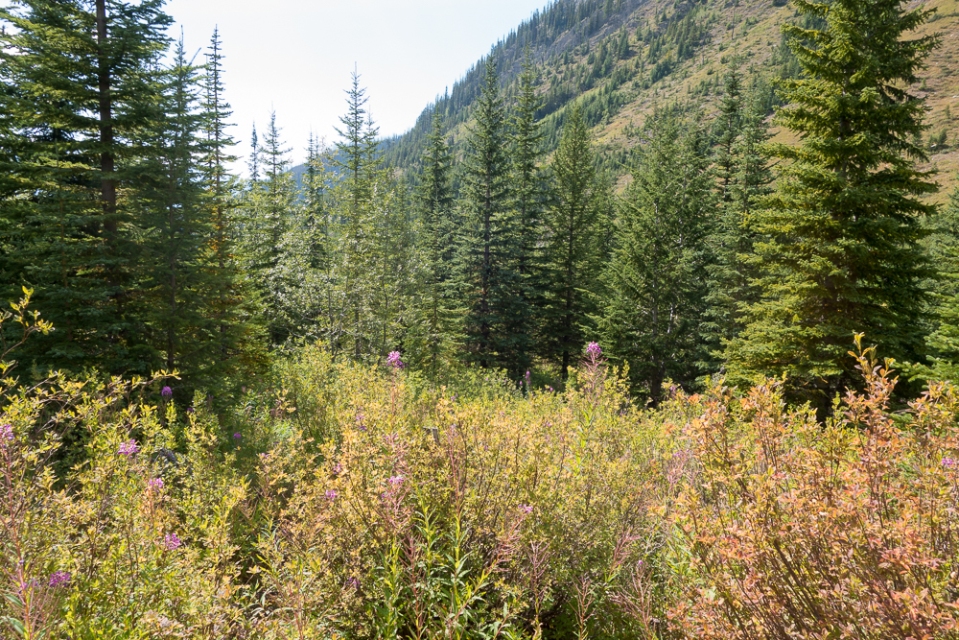 ← Beat the Heat
You Can’t Always Get What You Want →