It’s been a stellar week for skiing. On Monday, a great linkup of Haddo Peak and Mt. Aberdeen. Then a down day midweek on the Clamshell in Golden (this time without the whiteout) and finally, on Friday, a chance at redemption on Mt. Victoria’s wild north face after bailing earlier this year. With our recent failure still fairly fresh in our minds, Ian and I decided to pad our chances this time and arranged to leave town bright and early at 2 AM. Or, at least, as close as we could manage.

The route. Ascent in green, descent in red.

I’ll skim right past the beginning of the day: 5KM of dirt road in the cold and dark, which was exactly as expected. First light found us climbing up the willow-choked creek spilling out of the basin below our intended line. With skis and boots on our backs it was a bit of a thrash, but the building alpenglow on the surrounding peaks was enough to keep our spirits high. 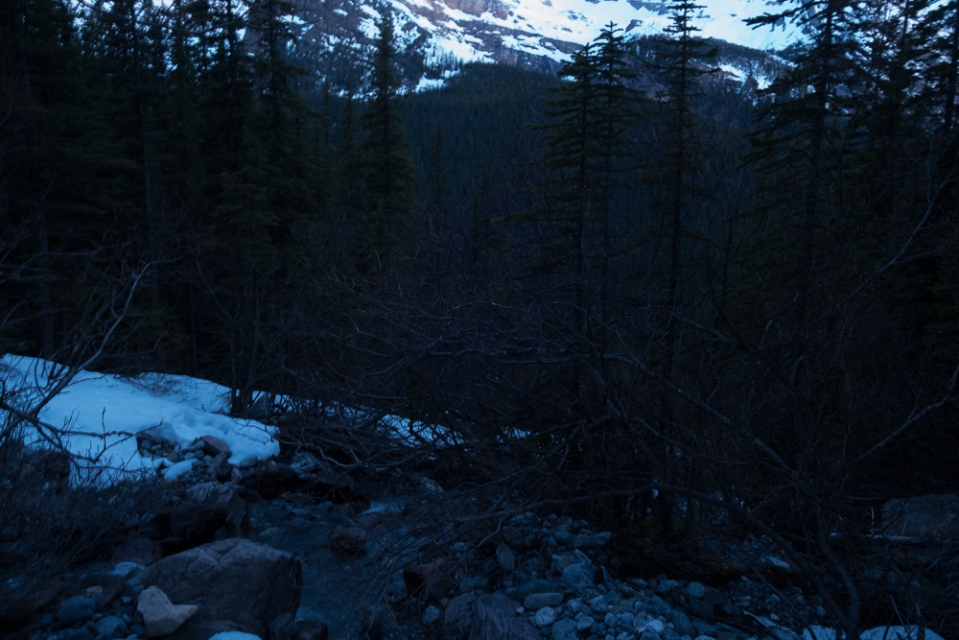 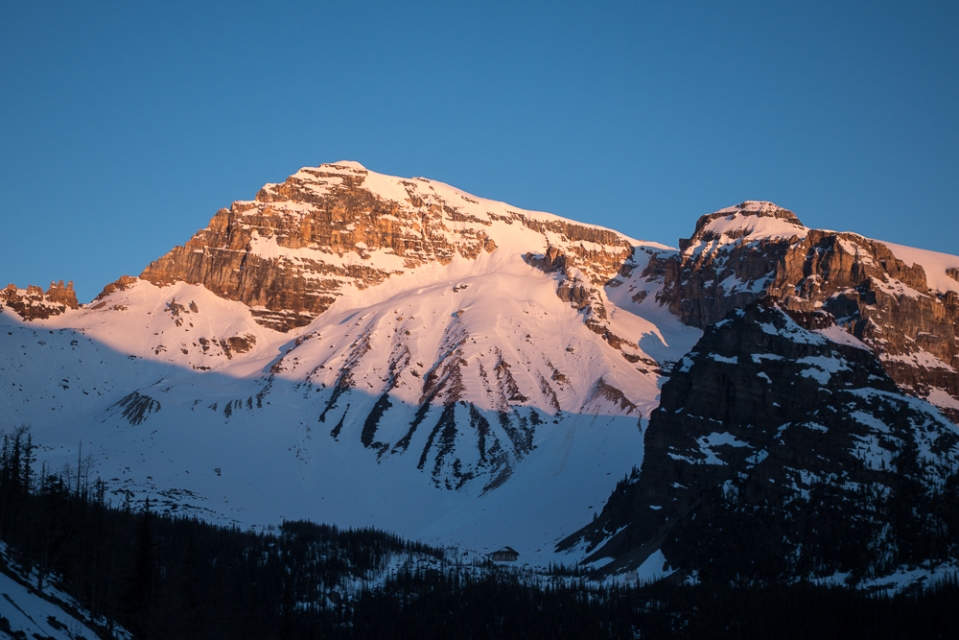 As we neared the top of the basin, the morning light hit the face high above us in full force and a few ominous cracking noises echoed from the walls of the narrow valley. A few seconds later, the offending chunk of serac appeared in pieces, its remnants tumbling over a small cliff we would have climb to access the glacier. Had we been a half hour earlier we would have been forced to play a surprise game of dodgeball.

A look up valley. Our route climbs the small rock step then turns right and out of view.

A breakfast break seemed in order, and we discussed options as we ate. The freeze was rock solid, temperatures remained cold and first light is notorious for isolated ice fall as the weaker chunks get their first solar input since being loosened by the night’s temperature swing. When our break ended, we had witnessed no further activity and cautiously decided to approach the rock step. At its base, still nothing, so up a short chimney we went. Then a quick move on skins through the majority of the serac hazard and we were looking up at the tongue of the glacier. 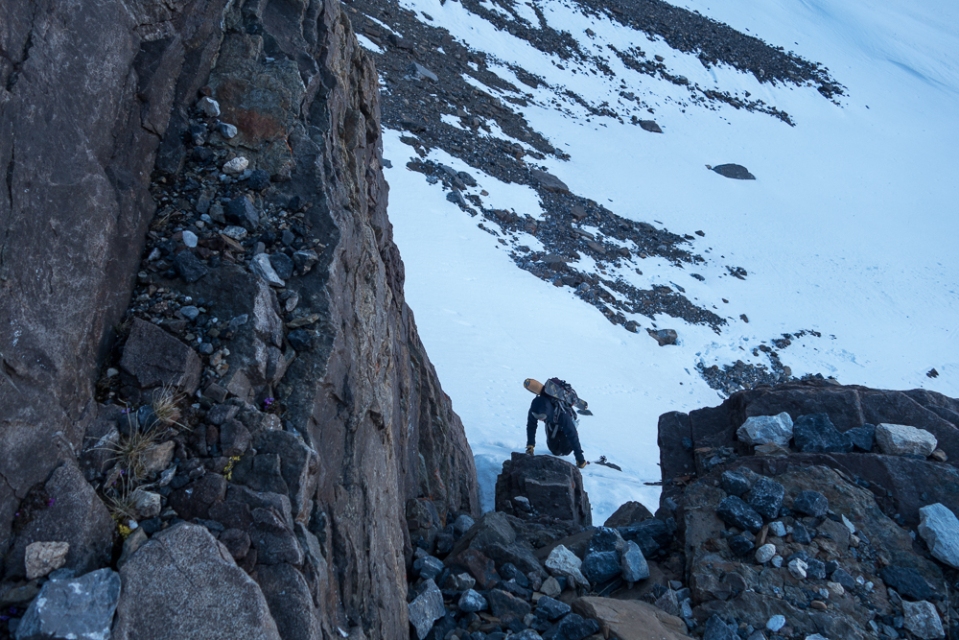 Ian on the tongue.

To avoid wandering back under the seracs, we climbed some easy ice to gain the main face, where a long bootpack took us through a well bridged minefield of crevasses and up to a final steep pitch before we could gain Victoria-Collier col. In our way, and surprisingly high on the face was a rather open looking bergschrund, which we approached with some trepidation. Picking a solid looking section of bridge, I eased my way onto it, only to poke a very dark hole in it with my foot.

A hasty retreat, followed by a graceless, breaststroke-ish crawl got solid ground beneath my feet again. Annoyed by the schrund’s antics and feeling quite keen to get away from it, I hurried upwards, instinctively probing with my pole as I went. That instinct was all that stood between me and discovering a second, better hidden hole the hard way. This time the breaststroke wasn’t going to cut it, but luckily the hole was narrow and a human bridge style flop-and-drag maneuver got the job done. 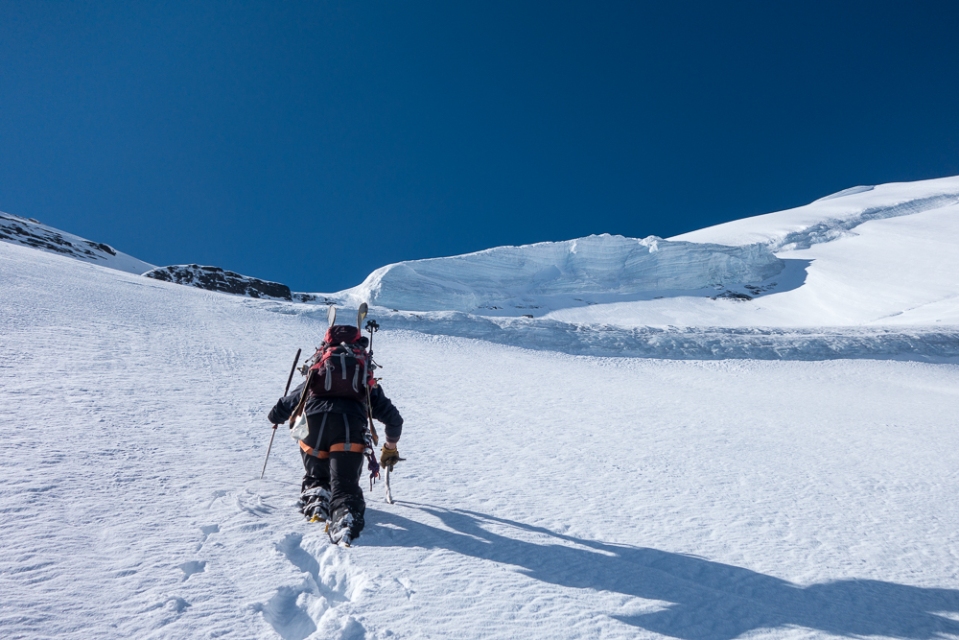 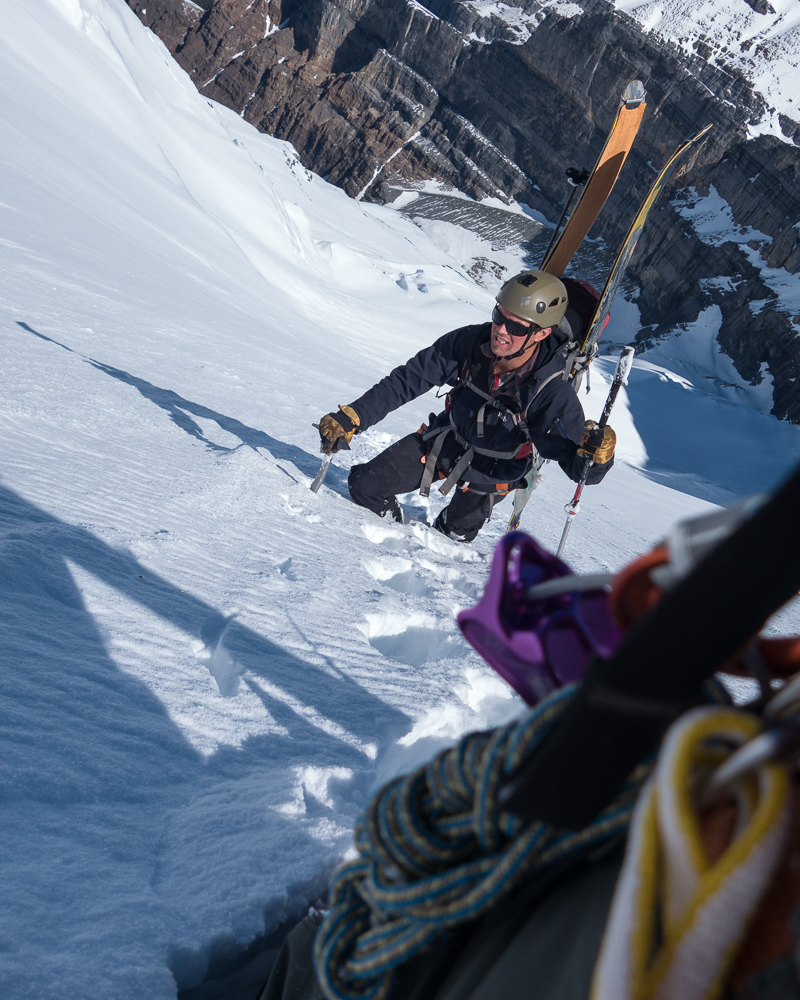 With that bit of excitement out of the way, we gained the col in short order. Then we booted on up to the peak – an easy and straightforward snow climb in either firm crust or powder depending in the micro aspect. We pulled onto the summit just after noon, and were greeted by an absolutely incredible view of everything around Yoho and Lake Louise. On high peaks like this one, I’m always floored by the beauty of the landscape I’m exploring. It never gets old.

Lake Louise from just above the col.

Ian looks back the way we came.

Temple, Lefroy and the rest of Victoria, just to name a few.

The sun was beating down though, and we couldn’t hang around. For that matter, we didn’t want to – there was pow to be skied down there.

I dropped in first and tested the snow with a few fun turns. I let myself get slightly too far skiers right at this point though, and was rewarded with a less than aesthetic traverse above some unskiable ice to regain my line. It worked out, and I began letting my turns run a little in the perfect alpine powder. With plenty of time to see it coming, I held my speed over the schrund, which made itself useful and swallowed up my slough.

Then onto the middle ramp/icefall, where 10cm of perfect powder lay over some very firm neve, forcing us to keep our speed in check. On more solar micro aspects the snow felt wet, and sure enough, a light ski cut was enough to send the warm snow well down the glacier. Taking care to stick to the most polar aspect possible, we skied a little more pow before a variety basket of crust, corn, debris and glacier ice led us back to our shoes and the long trudge out. Nearly a 1300m ski run, even in late May.

A look back at a wild run.

After my second attempt and Ian’s third, both of us were beyond stoked to tick this incredible face off the list. Excellent conditions allowed us to ski about as direct a line as ever seems possible, particularly in the lower half. Reports from other years suggest that very different conditions are possible, if not the norm through the lower two icefalls and tongue area. To get it almost entirely in some form of powder was the icing on the cake. What a day!