I wasn’t sure whether to write this post. It’s easy to talk about the risks until they turn to realities. Until consequence ripples outwards, tearing the meaning from the words. I don’t feel, though, that I can continue posting my own ski adventures without acknowledging the loss of the friend who has inspired so many of them. Despite the time that has passed since I found out, it is still raw, and my writing probably reflects that. Please bear with me. 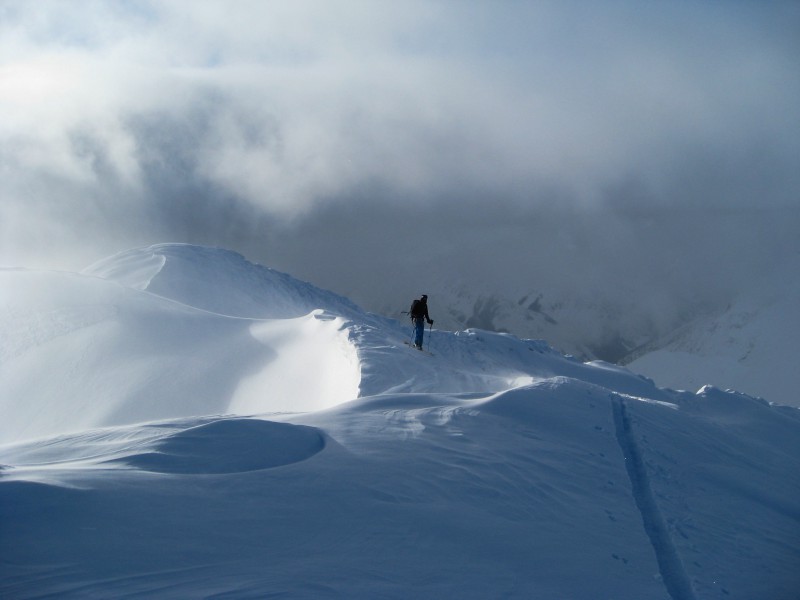 An old shot from a fantastic trip to Sorcerer Lodge.

On September 23, Trevor and I were at his house, tossing around half baked ideas about ski lines, consulting his vast array of photos and Google Earth data and discussing the effects of dehydrated food on the digestive system. We talked about the line he had on his mind: The Sickle, on Mt. Victoria. We had been eyeing it on and off for a few weeks, but work, life and conditions had gotten in the way. He’d had it with the waiting game and decided to take advantage of what looked like an incoming weather window. I was supposed to work, and he had another partner – a mutual friend – lined up, so I said I’d make the call at the last second. If I was stoked and the weather looked bomber, I’d be there to join my friends on a beautiful line. If not, I’d sit at the shop, jealous of the good time they were having without me. At some point, he had to pick up some groceries, so we said our goodbyes and both pulled out of his driveway at the same time, rolling away in opposite directions.

The next day passed, and I made the decision not to go at the last moment. The forecast was decent enough, but not perfect. Bailing seemed probable, but then so did success. Truly, more than any logical objection I just wasn’t feeling it.

The evening of the 25th, some hours after I expected to hear from them, I got the call.

I couldn’t believe it then. I’m not completely sure I do now. Everyone who plays in that environment knows the risks inherent to moving in binary outcome terrain. Despite understanding what happened that day, despite finding ways to learn from it, it seems so unthinkable that it could have taken Trevor. He was the guy who could do anything. Some people walk the thin line between what it and is not possible. Trevor, though, seemed to walk where the line once was, warping it to fit his path through sheer force of passion and motivation to succeed. That something so trivial as that tiny September windslab – barely 10cm deep by all accounts – could have knocked him off his feet, let alone ended his life is something I may never fully wrap my head around.

The mountains transformed Trevor in a way that never ceased to amaze me. Always just a little gangly, awkward and quiet in the valley, he turned into an absolute machine when exposed to the wild places he lived to experience. Confident and capable, he explored the mountains with fresh eyes, finding new possibilities wherever he looked. When it came to planning routes and “following his nose” through seemingly impassable terrain, he was a genius. Despite his accomplishments, when he returned to everyday life he again became his quiet, unassuming self. His dedication to his craft was matched by his humility, and without either reading his trip reports or asking directly you would never have known about whatever mind blowing thing he had just pulled off.

Trevor Sexsmith in his element.

His blog lives on at perpetualski.ca, chronicling his achievements better than I could ever hope to here. It is absolutely worth clicking on that link. The last post he made contains the video I’ve embedded below. It’s full of a stoked Trevor doing what he did best, skiing coastal looking spines on a remote 11000er. In September. In the most unsettling of coincidences, it’s set to Tool’s 10,000 Days. The song more or less speaks to an inspirational person who has left this earth after that period of time; a length which comes out to about 27 years and four months. It’s almost Trevor’s exact age at the time of his passing.

I don’t know what meaning there is in that, or in any aspect of such a tragic loss.

I do know that I’ll never forget the days that Trevor and I spent together, sharing in the joy of the mountains. I’ll never forget his sense of wonder, that goofy grin that would accompany a hoot of joy as he crested a ridge or summit, or the way he would rattle off the names of every peak within a hundred kilometres and the best ski lines on each of them.

As much as I miss him, I believe that Trevor’s spirit, passion and indomitable sense of adventure will live on in his partners, friends and the community he so often inspired. Today would have been his ten-thousandth day.