It’s been a weird, warm spring. When winter decided to make its return to the alpine halfway through June, I barely took notice, focusing instead on the effect the rain was having on the already dusty bike trails. Luckily, Trevor alerted me to my mistake. Some prodding to get me out of beach mode was required, but soon enough I was grabbing my skis for a mega day trip onto the Jumbo Glacier. With fresh snow, three Purcell 11000ers up for grabs, and the longest day of the year all coming together, we had every ingredient for a top notch mission.

I got home from work around 5:30 Sunday night, packed, and beelined it for my bed. I’ve got to get better at falling asleep during the day – I just can’t seem to pull it off when I need to. Once I realized the futility of my efforts, I settled for watching basketball while lying down, which isn’t honestly a very good substitute. By the time Trevor and I left Golden at roughly 11:00 PM, I at least felt a bit rested, which was something. A few bumpy hours on the logging roads west of Radium had us to the trailhead somewhere around 2:30 AM. By 3:00 we were hiking into the bush, the nearly full moon lighting the impressive glaciers above. 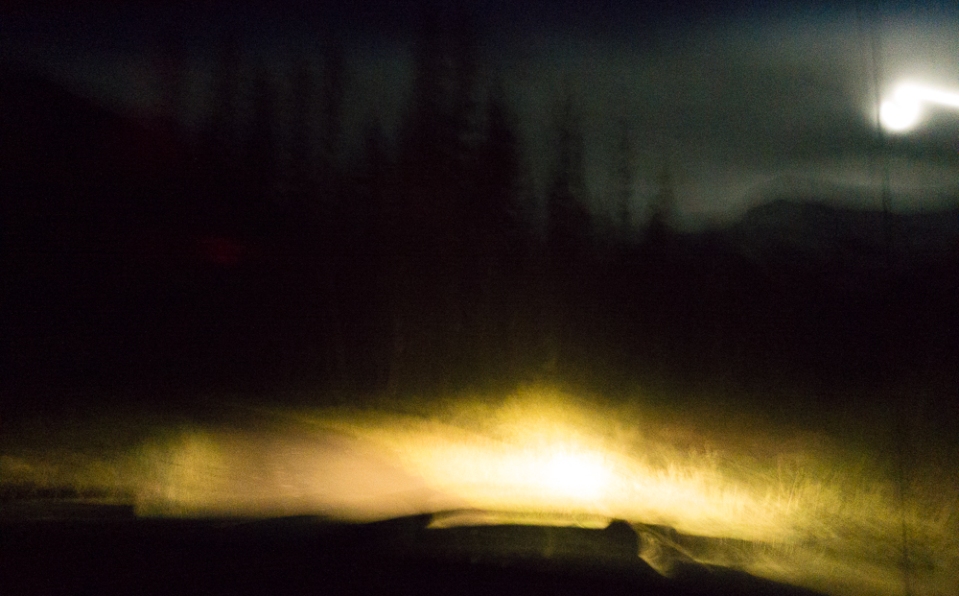 A truly terrible photo from the drive in.

We probably owe someone a beer for the recent clearing done on the trail. Easy travel led us to the base of the lateral moraine which, in turn, would lead us to the snow. It was around here that Trevor realized his helmet was in the truck and made a quick loop back for it, while I plodded up the knife edged ridge. In the quiet darkness the cirque is an amazing, if lonely place, and the distance passed quickly. Around 2100m, we hit the snow line and ditched our hiking boots, ski-cramponing upwards on a slippery crust next to the north ridge of The Cleaver.

The last of the alpenglow on the Commander Glacier. That’s the gorgeous NE Face of Commander mountain just right of center. 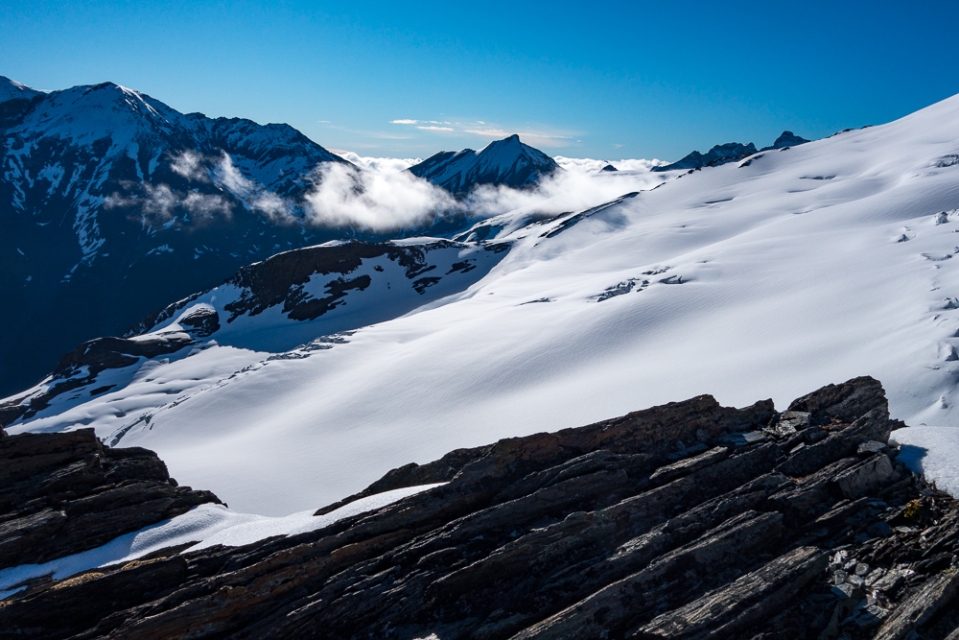 The Cleaver and Farnham glaciers to the east.

From there, we traversed across the ice, taking the high line up and over East Guardsman. It’s not much of a peak up close, but it is a ~3200m summit, and it afforded a fun, if firm warm up run on our way over to Commander Mountain.

Quite suddenly, the sun began to beat down. The forecast high cloud had never materialized, and it was getting hot. With hopes of skiing the fairly solar north east face of Commander, we hurried around the peak towards our planned climbing line on the west face. By the time we arrived though, we were nearly convinced the sun had been on the face too long. Sure enough, when Trevor hit the summit the small test chunk of cornice he sent down pulled a size two wet slide along with it. What had likely been a great powder run a few hours earlier was now a steep, dangerous pile of schmoo.

Crap. At least now we have a good excuse to go back. 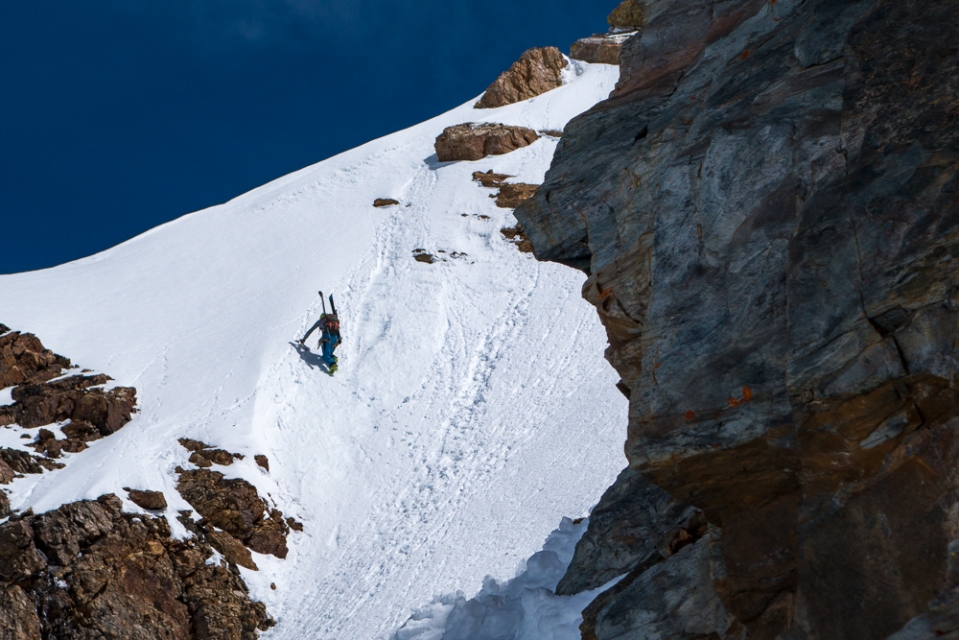 Trevor heads for the summit of Commander… 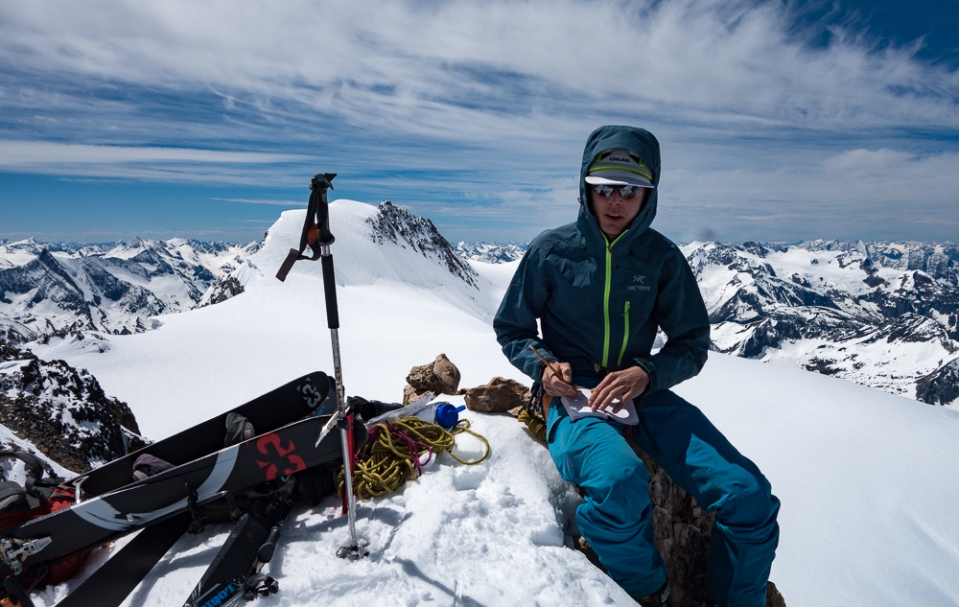 …where he enters our ascent, the first since 2013 into the register. Jumbo Mountain is behind his pole, awaiting our tracks.

We took some time on top to sign the summit register, then downclimbed a few meters to the snow we had ascended. There were a few decent turns to be had here, and after making them we coasted back out onto the Jumbo Glacier. Here we took a comfortable lunch break, and pulled out the Jetboil to brew up. The food and water really put some energy back into my legs. It also knocked some cobwebs out of my sleep deprived brain, which was a big boost in and of itself.

Our tracks on Commander, taken as we came past at the end of the day.

Soon enough it was time for the second 11000er of the day; Jumbo Mountain. An easy skin up the east ridge put us on the summit in no time, looking out into a sea of remote peaks. The view in all directions was absolutely incredible from every peak we summited on this day, but Jumbo’s particular position and slight edge in elevation put it a notch above. There are endless possible ski lines in those oft-forgotten mountains, and it’s easy to see why Trevor spends so much time there.

The run itself was fantastic. Wide open, fast skiing with a nice steep pitch to it. Snow conditions were great for any time of year, let alone the end of June. With skins back on, we headed upwards once more, now aimed at Karnak Mountain, our final 11000er for the day, and the furthest summit from the approach.

Jumbo and Karnak, again taken on the way out.

The peak looks quite large and imposing from a distance, but breaking from the usual foreshortened character of such features, it turned out to be surprisingly small when viewed up close. It wasn’t going to be a simple skin to the top this time though, as the steep, craggy summit was guarded by piles of frighteningly loose rock on all aspects. We chose the fairly aesthetic south east ridge, which yielded a mixture of fun scrambling on (thankfully) well frozen choss and spooky, corniced ridgeline.

It put up a better fight than anticipated, giving some ominously dark clouds time to sneak towards us from the west. Trevor topped out first and quickly signed the register for the first time since 2010, before dropped into one of the worst ski descents either of us can recall. Thin, sticky, wet snow sat atop grabby scree and loose blocks. For bonus points, the entire line rolled steeply over a band of exposed rock. It took some resolve to even make a turn in the stuff, but we both made it down unharmed. I can’t say we skied it with particularly good style, but ski it we did. I’d love to know if anyone else has made the same mistake. The entries in the register would seem to indicate not, but maybe someone has bagged it in completely different conditions without leaving a record of their visit.

Thankfully, the immediate risk of being caught in a storm had vanished by the time we got down — the dark clouds had wandered off to endanger some alpine climbers in the Bugaboos instead. It was now around 6:00 PM though, and at this point we were getting quite tired. The decision was easily reached to head back to the truck, leaving the West and Center Guardsmen and The Cleaver for another time. The weight in my legs on the short ascent back to Jumbo Commander col reinforced that choice. Luckily, we were able to traverse back to our ascent route without putting our skins on again. More quickly than expected, we were carving Super G turns through 1000m of beautiful corn snow back to our waiting hiking boots.

Trevor lays trenches into an awesome corn run, far above the road. The Farnham group dominates the background skyline.

The phenomenal run to end the day put a little life back into my tired legs, making the hike back to the truck seem surprisingly bearable. The evening light in the cirque made for some spectacular views as well, which the darkness of the approach had hidden. We finally arrived back at the trailhead a little before 10:00 PM, having been on our feet for around 19 hours. 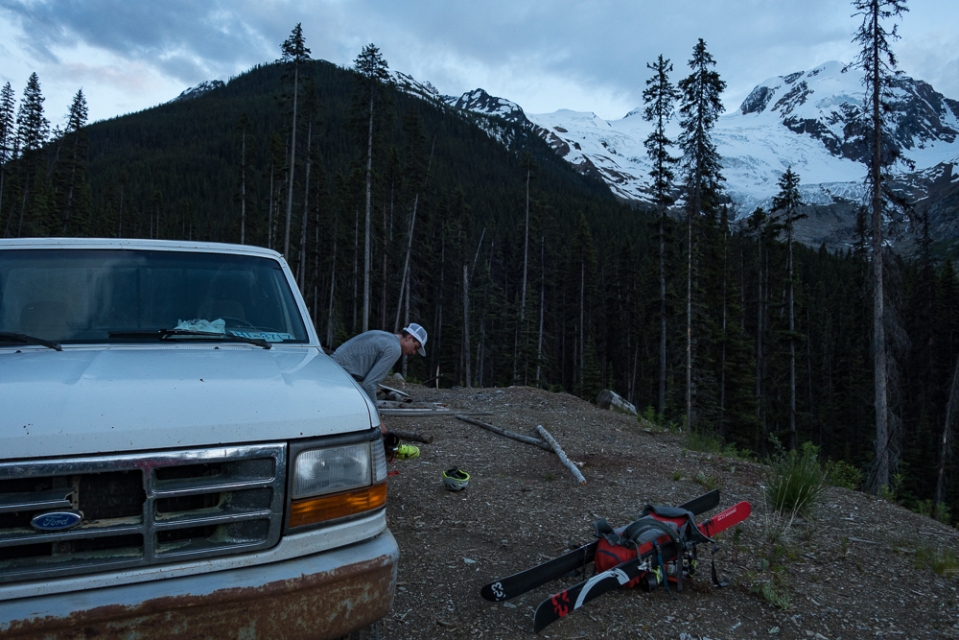 Back at the truck. Commander Mountain at top right.

We bumped off home under the apparently rare strawberry moon, which I neglected to take a picture of. It had been a long day. By the time I got home to bed, I had been awake for well over 40 hours, which is about as many as I ever want to be awake for. I had noticed some minor hallucinations creeping into my vision while driving home, and was definitely glad that Trevor was behind the wheel.

There’s something very cool about these long missions, which really challenge my perception of time and my own perceived limits. This trip was an incredible way to spend the solstice, exploring an absolutely spectacular area. Conditions were near perfect, and aside from the massive amount of daylight it in no way felt like June. Bagging four remote peaks, three of them 11000ers didn’t hurt either.

Of course, no Jumbo trip report would be complete without mention of the large scale resort development proposed for the area. A decades long battle rages on over its future, though things seem to have stalled for the time being. While I personally believe that ensuring accessibility to the beautiful landscapes we treasure is vital to maintaining interest in their conservation, I also feel that there are better places to do it. The increasingly broken Jumbo and Commander glaciers, and the massive slide paths in the upper Toby Valley are not, in my view a reasonable place for either a ski area or its infrastructure.