It seems that Mt. Macdonald has been on our radar lately. A few weeks ago we skied the number one avalanche gully and found it to be a lot more awesome than it looks from the road. 1000m of deep gully and slide path skiing, reminiscent of Frequent Flyer in the Connaught area.

This week, conditions didn’t line up for our long objective in the Rockies. Luke and I decided to head west instead, hoping to seek out some north facing pow in Rogers Pass. Our original plan to ski the Chromosome Couloirs on Cheops N. was scrapped when we realized the damage recent high freezing levels had done. Instead, we decided to get higher and a little rowdier on the north face of Mt. Macdonald.

Macdonald is an imposing piece of rock indeed, but its north face is split by a handful of aesthetic gullies and couloirs. Gully/couloir #9 has always called to me, just a classic looking splitter placed improbably in the middle of a spectacular face. 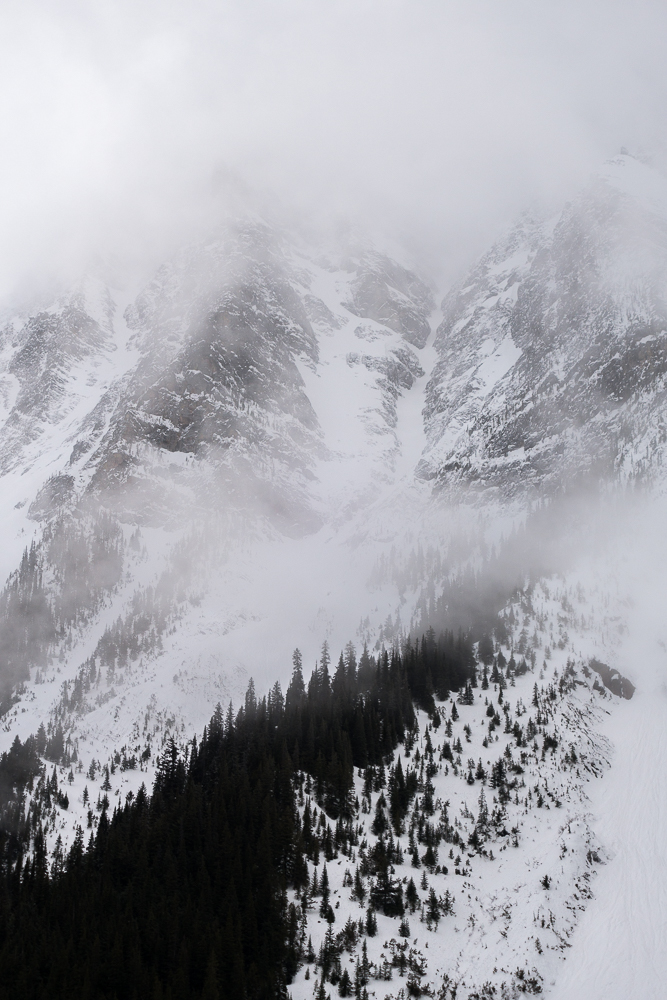 There it is. Gully number nine as viewed from the highway.

We figured we’d head up to the choke and have a look at least. The lines on Macdonald terminate in massive avalanche fans that easily reach the highway. In the confines of such a steep, committed piece of terrain it’s easy to see the consequences of misjudged conditions. Additionally, while there’s not a lot of beta around on this line, what there is suggests it to be an inhospitable place, capable of dumping a lot of crap on an unsuspecting climber’s head.

Once we hit the choke, we realized just how much this thing sloughs, or rather was sloughing. A near constant river ran down the centre of the line, but it was small and self contained, seemingly fed by the endless spindrift coming down from the walls and little else. The runnel was easily avoidable, and more importantly, the volume was completely consistent. We watched it for close to a half hour, saw no change whatsoever and set a cautious course upwards.

That bootpack is endless. We waded for hours, sunk to our waists. A cold wind whipped up the couloir in an endless battle with the snow trying to get down from the walls. In one choke the slough was unavoidable and we battled upstream for nearly half an hour in exchange for maybe 15 vertical meters. Ascent plates would have been great, but I don’t own them and Luke didn’t bring his.

Conditions improved after that as the line got steep. Luke measured a section near the top at 57 degrees, though some of the chokes were no doubt steeper.

Finally we carved out a platform at the top. Luke had snapped his pole climbing the thing, so he fixed that. Then we dropped in for an absolutely wild descent. Crazy deep, light snow, spindrift pouring off the walls, stopping every few turns to let our slough roar past. One of those times when instinct takes over because the environment is just too surreal for the senses. Eventually we hit the fan and bounced our way down to the highway, both beyond stoked that the mountain had allowed us such an unbelievable climb and descent.

A quick slog back along the shoulder to Hermit and that was that. Almost a 1500m day, straight up and SFD. 1150m of tough bootpacking and a wild ski descent in perfect conditions. About as good as it gets.