Last year, entirely on a whim, Cam Stuchly and I spent two nights skiing deep powder at Ripple Ridge Cabin near the summit of Kootenay pass on the number three highway between Salmo and Creston BC. You can read that trip report here. The gist is that the snow was terrific, we had a great time and we couldn’t wait to come back. So we did, and we brought long time friend and first time ski partner Jamie along with us – this time for three nights rather than the previous two. Again, we booked early as Jamie’s busy schedule required us snagging a booking during reading week, a time we assumed would fill up a little quicker. We figured that if the snow was really that bad we would just double up on booze and enjoy a drinking trip in a nice place. When it was initially said, this idea was a joke, but the closer the departure date got the more real it became.

Regardless, I once again picked Cam up at the Invermere Subway, this time with a sandwich that he bought there, presumably remembering the unpleasant stare down he received nearly a year ago to the day. He and Jamie piled their gear into the car and off we went. We hit the Cranbrook superstore, this year in t-shirts and ski pants, looking far more out of place than we should have. The car thermometer said 7 degrees, and it was 11am. Hopefully, we said, it would start to cool somewhere between there and our destination. Creston was several degrees warmer when we stopped at the excellent Real Food Cafe for lunch. Mercifully, we had 1200m to gain before we started skiing and the summit of the pass looked as though it at least remembered winter’s abbreviated tenure. Another 250m higher at the hut and things, while not wintery were looking entirely snow covered, which was really all we could reasonably ask for. The skin up had revealed that the snowpack was capped by a crust that mimicked nearly every quality found in fully hardened asphalt. At least it had the decency to be supportive, and with any luck it would soften on the south aspects, yielding skiable corn.

We didn’t bother hurrying out for an early start the next morning. As it was, the skintrack to Lightening Strike was rock hard at 11am and had seemingly been postholed by legions of people wearing hiking boots. This was a fun test of skinning ability for all of us. Once we gained the ridge though, we were treated to spectacular bluebird views of the area that Cam and I had seen so little of during last year’s three day whiteout. As hoped, south aspects were softening nicely and we enjoyed stunning views, easy bootpacking and fairly bad skiing on Stagleap Peak. At the expense of snow quality, stability was fantastic and travel quite fast; perfect for exploration. Prominent on the southern skyline was the imposing figure of Ripple Mountain, a peak we deemed a worthy objective for the next day. 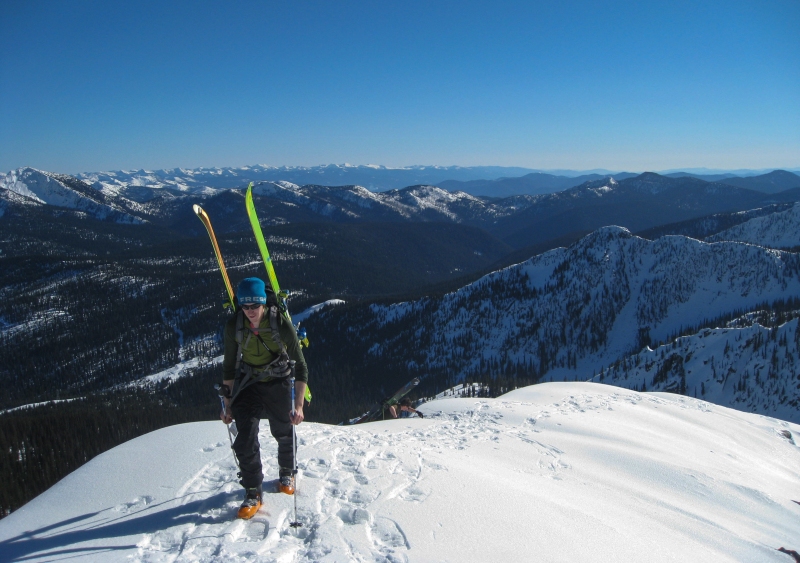 Jamie tags the summit of Stagleap Peak with Cam close behind.

Unaccustomed to the predawn start, Cam was unimpressed at getting up in the cold and dark, but a fire and warm breakfast lifted everyone’s spirits. There is nothing like watching the sun rise from the skintrack and as we worked along Lightning Strike ridge the early morning light was spectacular. We battled the hard and slippery, but mostly supportive crust up to a col at the southeast corner of the mountain. From there we were able to comfortably skin to the top of the softening southwest face, though the endless sidehilling on hard snow was certainly not the enjoyable experience it could have been in other conditions. If things were softer, the 800m descent down that face to valley bottom would be fantastic, as would the multitude of options on the steeper northeast face. We waited a bit for what little softening we could get and enjoyed a very fun ski on edgable snow back to the col. From there, a few hundred meters of breakable crust led to a long ski through rock hard rain runnels and open creek crossings down to the set of power lines that would take us back to the hut. In its own masochistic way, the long descent was a lot of fun. One last slog through some alder, grown in clearcut and finally, thankfully, well spaced old growth forest had us back at the cabin with several hours to spare before dark.

Jamie pauses to admire the sunrise.

Looking south from Ripple Mountain into Idaho and Washington.

Properly tired from the past two days, and with no good snow before we had to leave around mid day we took our final morning at the hut as an opportunity to enjoy the ice slide off the front deck. Presumably built a week or so before, when conditions were not only terrible, but unstable to boot, the slide was a masterpiece. We found faster and faster ways of riding it until we each had at least one sore appendage from bashing into the icy corners and called it quits. Grudgingly, we packed up and skied back to civilization. The frozen ruts on the iced up access road back to the highway were a particular treat with our heavy packs, but nothing could ruin our satisfaction at another great trip in the books. Chances are we’ll be back at this great little cabin next season to ski more of the endless terrain, hopefully with much better snow.