The Brewer Lakes trail, near Invermere, BC is a ride that I hold in very high regard. It’s a fantastic alpine trail, the scenery is unbeatable, it has scree slopes that make me feel like a pro, it has massive descents that make me feel tiny, and, most importantly, when I’m working at Panorama I can access it sans commute, from my door. This is a trail I would drive for hours to get to, and there it is, staring me in the face.

The trail is generally done in a day, one way utilizing a very long and unpleasant shuttle some 50km up a fairly rough logging road and a vehicle drop at the end point of Panorama Resort. If you’re looking to access the trail in this manner you would be very well served by checking out Lee Lau’s trip report here. In August of 2014, my increasingly voluntary bad idea partner Cam and I decided vehicle drops and shuttles were for pansies, and if we had to pack a tent to do this thing without them so be it. We would ride this sucker as an out and back (more or less) from Panorama Mountain Village. Actually I decided this, and Cam went along with it. Sorry Cam. You enjoyed it in the end.

Day one began with a rapid pack and a start at the crack of 11ish. There are advantages to living at the trailhead. We both carried 32l Black Diamond ski touring packs and split a MEC Volt 2 tent and Jetboil stove. Food needs were mainly taken care of by Mountain House, instant oatmeal, Mr Noodles and energy gels. It is worth mentioning that there is no cell service and help is hours away for the majority of this ride. We made sure to plan accordingly. We then proceeded to attract blank stares in the village as we utilized the bike park’s Mile One chair to get rid of a few hundred meters of elevation, a move our legs would thank us for later. From there, three options are available to attain the summit of the ski hill and begin climbing to Brewer Lakes. First, look up at the vertical that must be gained to access the rest of the vertical gain, sob, give up and go home. Second, follow the steep service road based hiking trail, or third, take the more moderate (but longer) service roads up through the Sun Bowl to the summit chairlift and follow Getmedown in reverse to instead get you up. Option three had been our go to on a previous day trip to the latter part of the next day’s descent and we stuck with it.

Looking back on one of Option Three’s many switchbacks. This part is mercifully flattish. Do not be fooled. Mt. Brewer in the centre of the background, and our destination out of view behind it. This photo and all others courtesy of Cam Stuchly.

There are no two ways about it, this part of the ride is a grind. Most of the 8km service road slog is graded at exactly the point where walking may or may not be faster and there is little shade, so bring plenty of water. Over those 8km (from the top of the chair, starting from the village adds a few km and about 300m) over 800m are gained, so on the bright side the views get pretty good. We put well over two hours into this section, knowing we needed energy for later in the day.

At least the views don’t suck.

Just before gaining the resort summit proper, we ducked onto Outback Ridge and traversed it to the ski area boundary. Just beyond that is a right turn onto a singletrack trail marked by a single piece of flagging tape. If the road gets steep you’ve gone too far. Continuing up the ridge to the subpeak known as Jessie’s Monster will yield some cool big mountain riding back to the trail, but adds more vert to an already significant day. The trail itself traverses to a small lake at the foot of Mt. Goldie, before climbing and descending a ridge to an outfitter’s camp at a minor pass. Here the trail splits, with the indistinct right fork heading back to the base of the resort on the Hopeful Creek trail and the much more obvious left ascending towards Mt. Brewer and Brewer Lakes. The trail is easy to follow and most climbs are rideable if you have the legs. Now in the subalpine, there are few trees large enough to cause significant deadfall, and the trail is buff. We could see easily that this was going to be great fun in the other direction.

Things really start to feel worth it.

I think both of us underestimated the amount of singletrack between us and our destination, and excitement for the next day’s descent quickly turned to dismay as we realized how far we had to go, and more importantly how much more we had to climb with heavy packs. Suffering turned out to be the order of the afternoon. Words like ” just give me the rest of the damn tent, I’m sleeping here” were spoken, as we realized there was another not-so-mini mini peak between us and our goal just when we though we were home free. This is also where the trail starts gets a little more technical with some roots and chunks of alpine rock breaking up the buffness. The high point of the climb is at 2400m before one last alpine descent to Brewer Lakes and our camp for the night. There are two Brewer Lakes, and the more southern of them yields the best campsites by quite a bit. It’s a reasonably popular hiking area at this end, so we were relieved not to have to share. 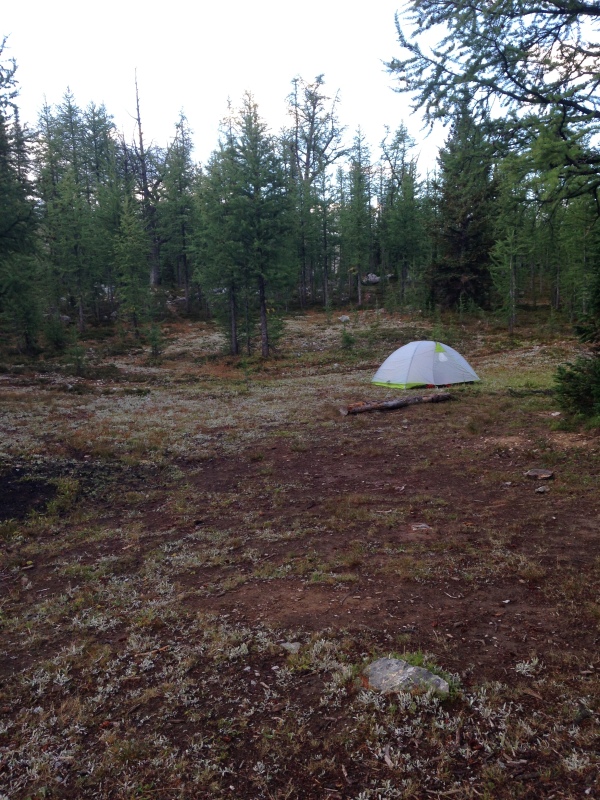 Dinner was served (freeze dried chilli mac never tasted so good) and I think we were both out cold by 8pm. 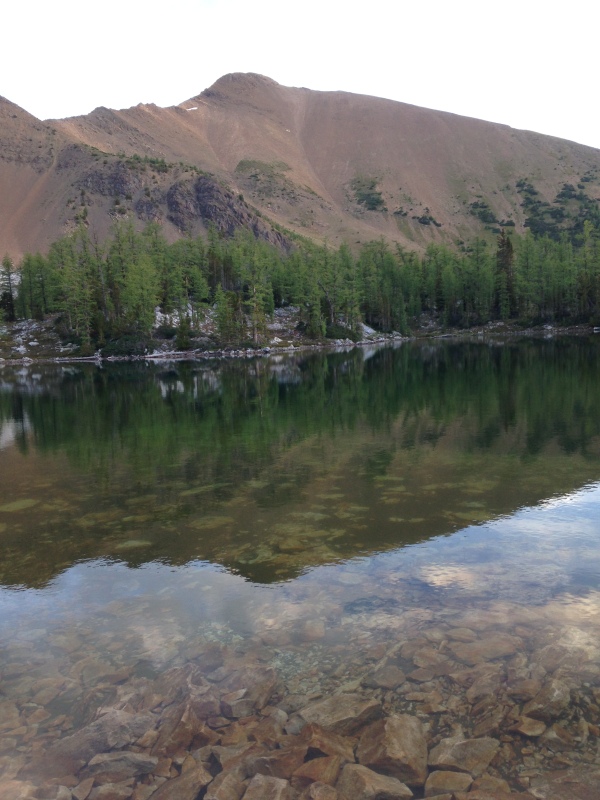 A waterfront tent no less. Mt. Brewer stands in the Background.

Our stats for the day came in at roughly 1500 vertical meters of ascending over 18.5 km. Those were numbers we couldn’t wait to reverse just as soon as we passed out for 12 hours. As it turned out though, Mother Nature had a bit of a different idea. We were treated to a bizarre silent, dry lightning show for a few hours that eventually subsided into a light rain. We fell back asleep really hoping it would go away by morning.

A full description of day two is coming up just as soon as I write it. Thanks to Cam Stuchly for all photos.